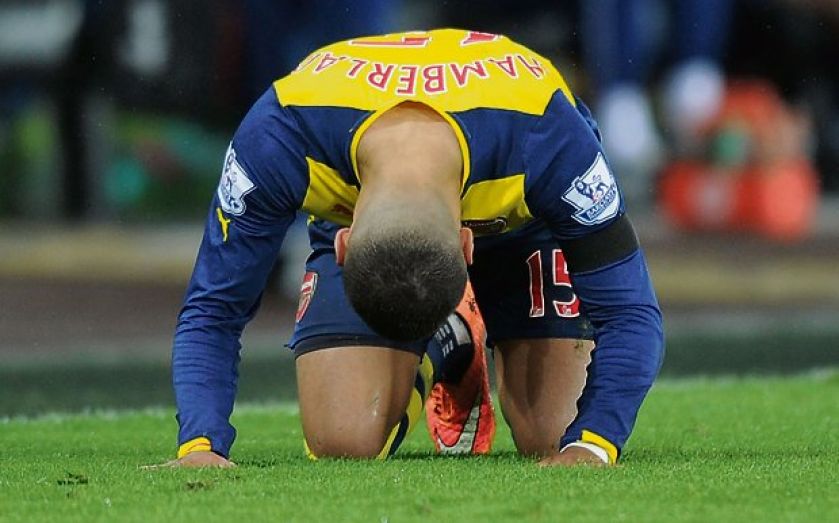 EXASPERATED Arsenal manager Arsene Wenger blasted his team for throwing away a lead for the second time in a week after they allowed Swansea to snatch a win from the jaws of defeat yesterday.

The Gunners looked on course to return to the Premier League’s top four when forward Alexis Sanchez netted his 12th of the season, but former Tottenham midfielder Gylfi Sigurdsson’s free-kick levelled with a quarter of an hour remaining and substitute Bafetimbi Gomis completed the turnaround by heading the winner moments later.

Wenger’s men faced stinging criticism for letting a three-goal lead slip at home to Anderlecht in the Champions League five days earlier, and the Frenchman was dismayed after his team again crumbled with victory in touching distance.

“We were in control and at 1-0 up I felt we allowed them back into the game by losing some challenges in the middle of the park that you cannot afford to lose,” he said.

“It’s unfortunate to lose a game like that but we were not rigorous until the end. We produced quite a decent performance for 75 minutes but you have to last 90 minutes. Did Tuesday night play a part in our mind? I don’t think so, I hope not.

“In the end we lost the three points. That’s very sad and very disappointing but we have to take it on the chin. We didn’t play for 90 minutes with the right vigorous attitude.

“It’s very disappointing. Today we had an opportunity to come back into the top four in a bit more of a comfortable way and the fact we didn’t take it is disappointing.

Victory lifted Swansea to fifth, one place above Arsenal, who are already 12 points behind runaway leaders Chelsea with 11 games played.

“At the moment Chelsea turns around an average of 100 points per season,” Wenger added. “If you look at the number of points they have today, if they keep that up nobody will touch them and that’s for sure. It doesn’t look like there’s anybody capable of challenging them at the moment.”

Swansea enjoyed the better of a cagey first half but Arsenal took the lead in increasingly heavy rain in the 63rd minute when striker Danny Welbeck calmly squared for Sanchez to slot home.

Sigurdsson equalised with a flawless, curling set-piece after Kieran Gibbs had fouled Modou Barrow 25 yards out, and Gomis delivered the winner three minutes later when the Frenchman out-jumped makeshift Gunners centre-back Nacho Monreal to meet a teasing cross from winger Jefferson Montero, who proved the scourge of young right-back Calum Chambers all afternoon.