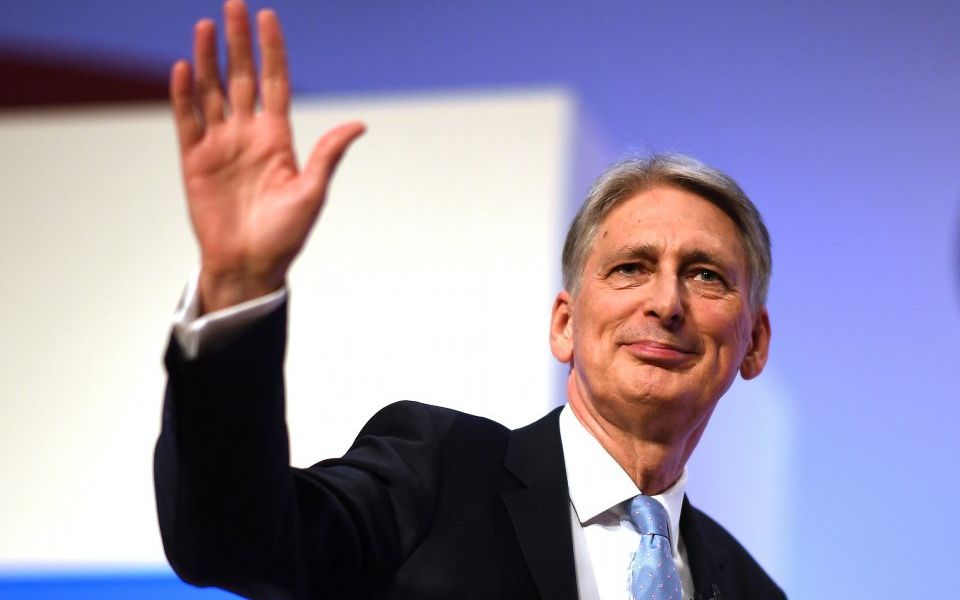 Philip Hammond tried to paint the Conservatives as the "party of business" today as he launched a sustained attack on the Labour Party's plans for the economy.

Speaking at the Tory conference in Birmingham, the chancellor urged his party to put on a united front to defeat Jeremy Corbyn – arguing Labour's plans would threaten UK prosperity.

Read more: CBI calls for 'change of tone' on business from Tories

Hammond warned his colleagues that aping Corbynism by promising "reckless spending" and putting forward "short term gimmicks" would only damage the economy.

He also vowed to introduce a new tax on global digital companies even if the UK cannot secure international agreement on the plans in order to help public services.

In a speech lasting more than half an hour, Hammond put forward his "vision" for the UK as he admitted "too many people feel that they have lost control".

In a bid to combat the notion the Conservatives are no longer advocates for enterprise and entrepreneurs – summed up by reports former foreign secretary Boris Johnson said "f**k business" earlier this year – Hammond said: "We back business as the cornerstone of a successful economy, as a force for good in our society and as an essential expression of our values.

"So just in case anyone, anywhere, was in any doubt at all, let me say it loud and clear: The Conservative Party is, and always will be, the party of business."

Hammond devoted much of his speech to attacking Labour, after shadow chancellor John McDonnell used an address at his own party conference last week to call for 10 per cent of company shares to be handed to workers, and pledged to fire directors and senior executives of water companies once the utility had been renationalised.

The chancellor described the market economy as "the model that has delivered 200 years of economic growth, that has seen living standards in this country more than double in my lifetime, that has lifted countless hundreds of millions out of poverty around the world and that has secured our freedoms and our liberties down the ages".

He added that it has been rejected out of hand by Corbyn and McDonnell in favour of what he called the failed and faded ideologies of socialism.

He added: "We will not outbid Corbyn with short-term gimmicks that cause long-term damage; we will not outspend him with reckless borrowing; we will not promise the illusory utopia he offers because, as those who have tried it have shown time and time again, it is based on a lie and it always ends in tears."

As well as announcing plans to consult with business on how to reform the apprenticeship levy – which requires businesses with an annual pay bill of £3m or more to invest 0.5 per cent of their wage bill in apprenticeship training – Hammond announced plans to raise money from global companies trading in the UK.

He said: "The best way to tax international companies is through international agreements, but the time for talking is coming to an end and the stalling has to stop.

"If we cannot reach agreement the UK will go it alone with a digital services tax of its own."

On Brexit, the Chancellor spoke in defence of Theresa May's so-called Chequers proposal, and said it was his party's job to convince the EU that it was an acceptable plan.

"[European Council president Donald] Tusk says it won’t work but that’s what people said about the lightbulb in 1878.

"Our job is to prove him wrong."

CBI director-general Carolyn Fairbairn praised Hammond for bringing back "pride and confidence in British business", but raised concerns over the digital services tax.

She said: "All businesses are increasingly digital. Any new approach must be built on evidence from enterprise or it risks being blunt and counterproductive."