ONE OF Britain’s biggest pension schemes has bought a stake in the national air traffic controller Nats for £143m.

USS will own a 49.9 per cent stake in The Airline Group, a vehicle used by transport firms to hold 42 per cent of Nats.

It will be an investor in The Airline Group alongside the carriers that have opted to keep their stakes: EasyJet, British Airways, Airline Company Limited and Monarch Airlines’ pension scheme. 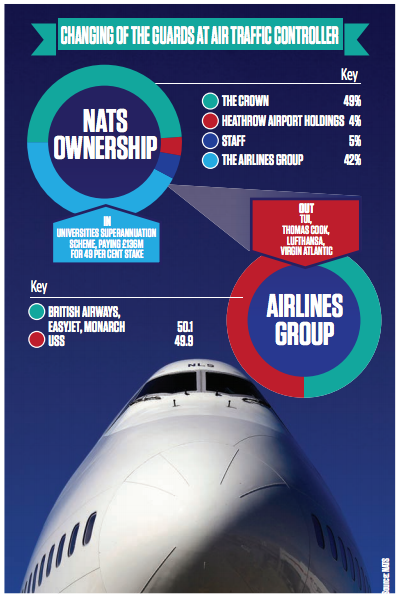 “This is another significant investment for the scheme and its members in a high quality infrastructure company,” said Mike Powell, head of private markets at USS’s investment management arm.

“The growth of our infrastructure portfolio by our in house team is a compelling model for the trustee board in meeting its long term commitments to members.”

Tui and Thomas Cook said they were selling out as part of their asset disposal schemes, but will each retain a nominal shareholding.

Nats, which was part-privatised in 2001, remains 49 per cent-owned by the Crown.

The government considered selling down some of its stake last year, but the plan was abandoned over concerns about a foreign company taking control of a key part of British aviation infrastructure.

USS was set up in 1975 to run defined benefit pension schemes for 400 educational institutions. It has assets of £40bn, along with a funding deficit that analysts claim tops £10bn.