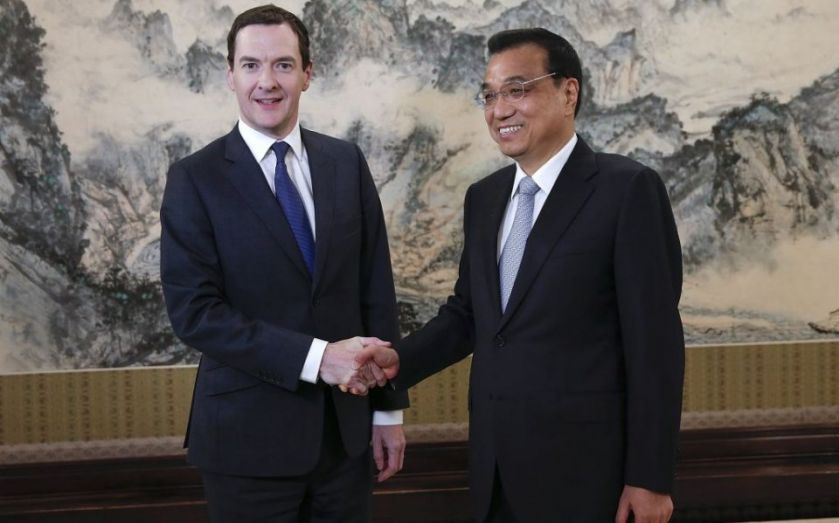 Chancellor George Osborne will today brush off concerns over volatility in Chinese markets and reveal new plans to connect British and Chinese stock exchanges.
Unfazed by August’s market shocks, and the authoritarian response from Beijing, Osborne will say at the Shanghai Stock Exchange today: “Whatever the headlines, regardless of the challenges, we shouldn’t be running away from China.”
The chancellor will acknowledge in his speech that Shanghai was the “epicentre of the volatility in financial markets this summer”.
However, writing exclusively in today’s City A.M. Osborne says that he wants to “cement London’s position as China’s partner of choice as it raises finance on international markets”.

The chancellor is expected to announce in Shanghai today a new “feasibility study” into connecting the UK and Chinese markets.
Read more: Osborne: China is key to securing London’s future
While City A.M. understands that the study is in preliminary stages, it is part of a wider package of deals announced by British and Chinese officials yesterday, including an agreement to extend and expand the renminbi/sterling swap line, as well as plans for the People’s Bank of China to issue short-term RMB bonds in London.

“Our package of agreements with the Chinese this week will firmly establish London as China’s bridge to western financial markets,” Osborne writes.

Diana Choyleva, chief economist and head of research at Lombard Street Research, told City A.M. that, while she would advise British clients against investing in China given recent volatility, the chancellor’s efforts could lead to a more open and transparent Chinese economy.
Read more: Is Hinkley Point C nuclear plant a good deal for the taxpayer?

Chris Philp, a Conservative MP who is also on the Treasury committee, told City A.M. that he also welcomed the chancellor’s announcement, saying: “It’s important that London, as a financial centre, gets the good market share of China-related transactions.”

“All economies have ups and downs as they develop, and clearly the Chinese markets have a long way to go,” Philp added. “We should be encouraging the Chinese to have better transparency.”

Wes Streeting, a Labour MP who sits on the influential Treasury select committee, told City A.M. that the chancellor was acting in the “national interest” by engaging with China.
But Streeting added that there are “challenges that come with working with a country that is actually fairly closed”.

“I’m not sure that we have a clear view of the Chinese economy,” he said, adding: “It’s really important that investors and partners with China have transparency and understand the degree of state intervention there.”

In a separate announcement, the London Stock Exchange said today that the London branch of the China Construction Bank has become the ninth Chinese “member firm” of the exchange, a distinction shared by about 400 firms with access to trading directly with the UK markets.
Meanwhile, HSBC Asia-Pacific boss Peter Wong said this week that the British bank planned to hire 4,000 more people in China, expanding its operations in the country while cutting costs elsewhere. The bank said earlier this year that it planned to get rid of 8,000 jobs in the UK in both its retail and investment banking operations.
Share