The new model Vanquish Volante shows that the only thing better than an Aston Martin is another Aston Martin.

If you’ve been paying attention, you’ll know that the Volante version of the Aston Martin Vanquish is a relatively new car. It first appeared late in 2013, with UK sales kicking off early in 2014, so it’s only just reached its first birthday. Yet the Warwickshire-based firm is now offering a 2015 version, with a number of enhancements designed to make it an even more tempting proposition.
If that suggests a little concern on the part of Aston Martin that maybe the flagship model wasn’t the superstar it should have been, they’re certainly not letting on. The truth is the biggest change for the 2015 version is centred around hardware and software upgrades that all V12 models will eventually receive.
One thing that remains blissfully as before is the Vanquish Volante’s stunning appearance. Armchair critics will accuse the Vanquish and its stablemates of all looking the same, the obvious retort being that few would complain if Mila Kunis had an identical twin sister. There are new exterior and interior colours added to the range, but even in the most questionable of hues it is sufficiently beautiful that traffic will stop and jaws will clatter to the ground as it passes by.
Inside, the Vanquish Volante is largely as before. Happily it’s always had a distinct cabin layout to other Astons, ditching the somewhat dated set-up used elsewhere across the range. Its haptic touch controls are easy to use, while the tidier layout means a little more space in what is a relatively cosy cabin. There’s a single cupholder and a modest cubby under your left elbow, but leave the chattels at home. 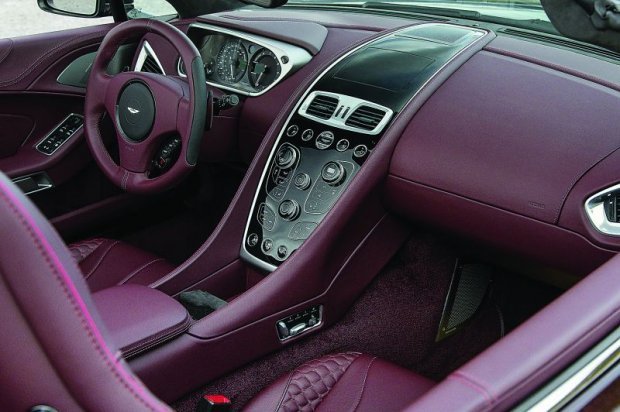 Inside the new Aston Martin

More importantly, the Vanquish Volante delivers when you drive it. If you don’t feel a tingle of excitement as you walk up to it, key in hand, then I fear for your soul. Slot in the key and it starts with a busy and complex whirr, then immediately press the Sport button to engage the exhaust bypass valve – that way you hear every last thing the engine has to say. The latest engine management software means power is up to 563bhp and torque to 465lb.ft – small but welcome increases.
Punch the D for drive button on the dashboard and you’re hooked up to the new Sportshift III gearbox, which offers eight forward ratios. That extra ratio and revised final drive not only means a higher top speed but also the 0-62mph is down by half a second to 4.0 seconds dead. It’s even quieter than before, works better in fully automatic mode and offers sharper manual shifts when you take control.
These changes mean the Vanquish has the bite to match its glorious bark. It was always a fast car but the better gear ratios make the most of the V12’s keenness to rev as well as exploiting its generous torque. Whether you’re cruising or crushing the wannabe in the lane next to you, the Vanquish Volante has the performance expected of a car competing at this level.
You’ll also notice the revised steering and tweaked suspension, both of which have been sharpened up for better responses. Despite this the Vanquish doesn’t give up its GT status; you can cover motorway miles without having to work too hard, and yet when you turn off onto a B-road you can revel in its ability. It’s sophisticated and modern but pleasingly old-school in how it drives, with the front-engined layout providing reassuring grip at the front with the option to play with the rear should you be in the mood. The revised ESC system helps here, too, and though it might look odd, the optional squared steering wheel is a pleasure to use.
The Vanquish Volante should be on your shopping list already, but the 2015 model year revisions all contribute to a car that is even more impressive than before.