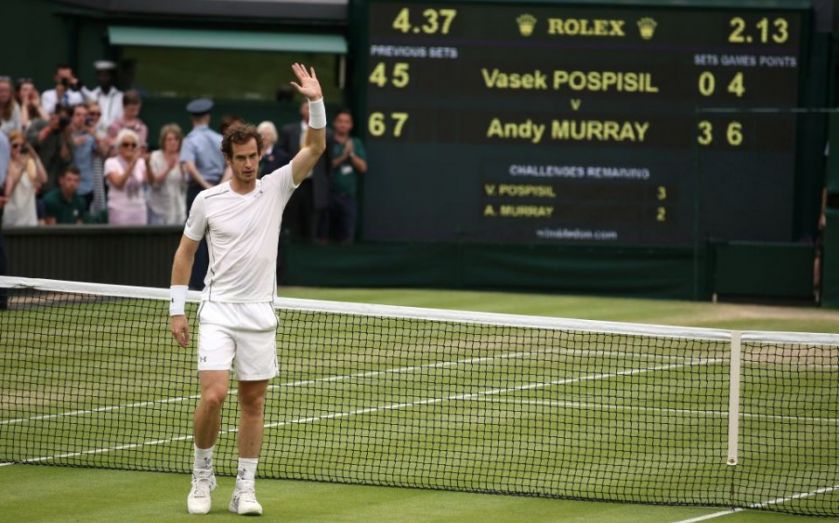 Britain's Andy Murray insists the scars incurred from his humiliating defeat to world No2 Roger Federer during their last encounter have long since healed as the duo clash for a place in the Wimbledon final tomorrow.
Read more: Murray is third-highest earning man at Wimbledon
Third seed Murray surged into the last four of the championships by defeating unseeded Canadian Vasek Pospisil in straight sets, 6-4, 7-5, 6-4, yesterday – the sixth time in seven years the Scot has reached the semi-finals at SW19.
Seventeen-time grand slam winner Federer brutally demolished Murray 6-0, 6-1 at the ATP World Tour Finals in November, a scoreline which the 28-year-old admits reverberated around his inner circle.
“I was actually quite calm after that match but a lot of people in my team, people around me, were very, very worried by that match,” said Murray. “The scoreline was embarrassing but I felt quite calm about it.
“I looked at the matches I played at the O2, the matches I played against Novak [Djokovic] over that period, assessed it, and said ‘where am I going wrong against the top guys and what is it that I need to do to get back to that level and compete with them?’
“I dealt with it that way and tried to be rational about it. I came back and played some extremely good tennis at the beginning of the year in Australia. So it was a tough loss, for sure, but I tried to deal with it in the right way.”
British No1 Murray dispatched Pospisil for the third time this year without dropping a set in front of a partisan Centre Court crowd, although he admits the popularity of Federer, who brushed aside Frenchman Gilles Simon, may dampen his backing.
“I hope I get good support on Friday. It’s been the case throughout the whole event and every year that I’ve played here, but Roger’s extremely popular everywhere he goes,” added Murray.
“It might not be as partisan a crowd or atmosphere as some matches that I play here. But it will still be an excellent atmosphere so I’ll still get a boost from the crowd, I’m sure.”
World No 20 Richard Gasquet, meanwhile, overcame French Open winner Stan Wawrinka in a thrilling five-set contest, winning 6-4, 4-6, 3-6, 6-4, 11-9. It is now 20 years since the top four seeds have reached the semi- finals at the All England Club.
Gasquet will face world No1 and defending champion Novak Djokovic, who sealed his place in the last four by beating Croatia’s US Open champion Marin Cilic.