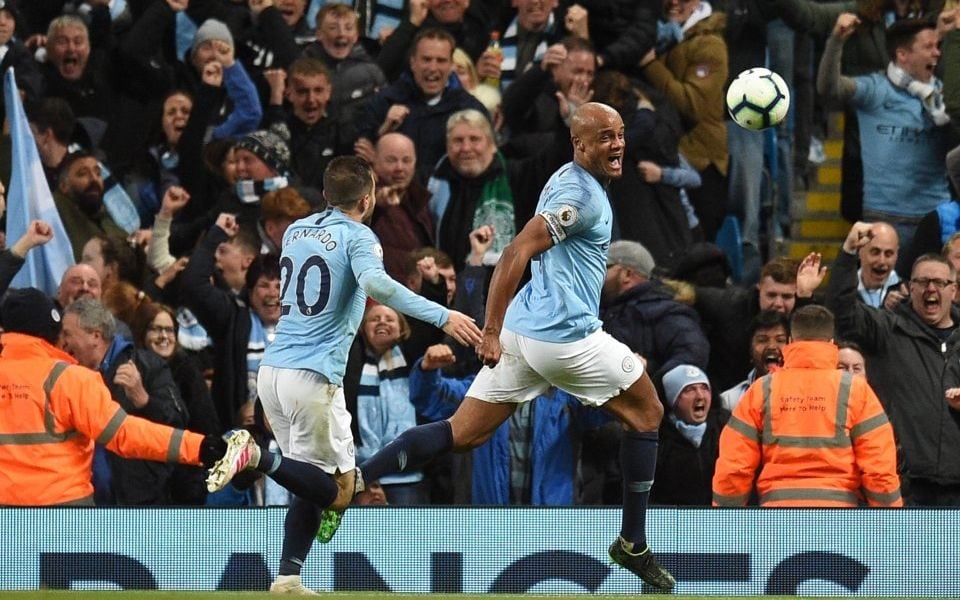 Manchester City can beat you in so many ways, but a Vincent Kompany outside-of-the-foot, long-range screamer? That is not something you expect to happen.

Pep Guardiola’s side are team built on the foundations of rigorous drilling on the training field. Their manager is a football obsessive who has built his reputation on a distinctive style: pass and move, get to the byline, pull it back to the six-yard box, ensure you take on shots with a high chance of success.

And yet the goal which could well seal the Premier League title was a pot-shot from the least likely source. Leicester’s players, who had defended manfully for 70 minutes, looked up and welcomed the City captain’s effort – and with good reason.

Kompany had never scored from outside the box. He had not even fired in a shot on target from outside the penalty area since December 2013. His attempt had an Expected Goals (xG) rating of 0.02 – meaning if he took on that same shot 100 times, he would, on average, score just twice. Luckily for them, this was one of them.

The Etihad Stadiun didn’t quite match the drama of Sergio Aguero’s famous Martin Tyler-exploding match and title-winning goal against Queens Park Rangers from 2012. After all, City have still got to beat Brighton on Sunday. But by the end of this week it could prove to be just as significant.

Man for the occasion

Many people thought 33-year-old Kompany was beginning to look like a relic of City’s past. He was used sparingly at the start of the season, with Guardiola preferring Aymeric Laporte, John Stones and Nicolas Otamendi.

But with the title going down the wire the Catalan coach has stuck with his captain and handed him a 12th league start of the season. There have been some mistimed challenges – like his on James Maddison in the first half – and shaky moments, but there can be no question now of his importance to his team.

Kompany was emotional at the final whistle (Source: Getty)

The Belgian hadn’t scored for over a year, yet his last three goals now read: potential title winner, Manchester derby strike, EFL Cup final. He is unquestionable the man for the big occasion; a Premier League title at the Amex Stadium on Sunday would make it nine trophies in 11 years.

The context for the strike heightened the moment even more. The Etihad crowd had been audibly nervy throughout the opening 70 minutes, groaning at misplaced passes, cursing Kasper Schmeichel’s saves and Leicester’s blocks.

As timed ticked on it looked as though City could be going down to the wire. Wilfried Ndidi intercepted, Hamza Choudhury harried, Ricardo Pereira tackled. Jamie Vardy and Maddison looked a constant threat on the break.

Phil Foden had shot straight at Schmeichel, Aguero had headed against the woodwork from a corner, Raheem Sterling had headed over, Ilkay Gundogan had curled wide from the edge of the area, Schmeichel had produced an instinctive save from Aguero. Still it went on.

Leroy Sane was summoned from the substitutes’ bench. A bold 4-2-4 formation was deployed. But still Leicester, with a clear game-plan, solid shape and great determination, wouldn’t budge.

“For me I always feel in big moments like this that I’m going to do something,” Kompany told Sky Sports post-match.

“Today was a little big of frustration because everyone was saying: ‘Don’t shoot! Don’t shoot!’ and I could really hear it and it was annoying me and I thought: ‘Hold on a second, I’ve not come this far in my career for young players to tell me whether I can take a shot or not’, so I just took it.”

City fans will be glad he followed his hunch.