M&A sprees are addictive... and they cause me to sell, sell, sell 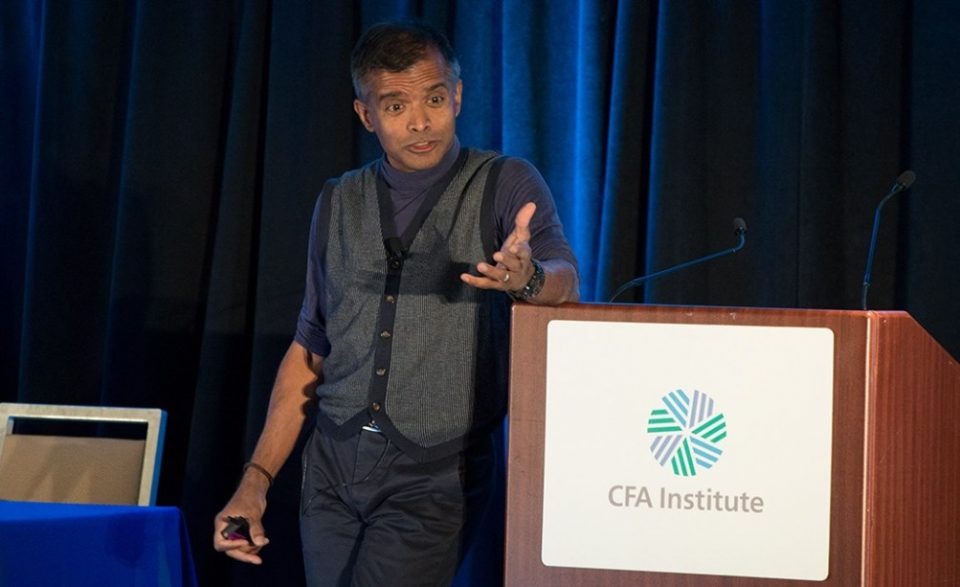 Aswath Damodaran has a blunt message for companies considering an acquisition: “Don’t do it.”

“I firmly believe that acquisitions are an addiction, that once companies start to grow through acquisitions, they cannot stop,” Aswath Damodaran, Professor of Finance at New York University Stern School of Business, told the audience at the CFA Institute Equity Research and Valuation Conference 2018. “Everything about the M&A process has all the hallmarks of an addiction.”

That’s why he titled his presentation – as relevant today as it is was then – ‘Acquirers Anonymous’.

And like every addiction, the acquisitions habit exacts a heavy toll from its abusers and those who rely on them. “If you look at the collective evidence across acquisitions,” Damodaran said, “this is the most value destructive action a company can take.”

The dilemma comes down to how companies generate growth. And it turns out there are really only a handful of strategies that can accomplish that, Damodaran said, referencing data from a McKinsey study.

“The very best approach of creating growth historically has been to come up with a new product,” he said. “Look at Apple. Between 2001 and 2010, the company went from being a $5bn company to a $600bn company, and they built it on the iPhone, the iPad.”

But creating new products is like playing the lottery. When you win, the payoff is huge, but wins are rare and losses common. “Think of the contrast with Microsoft’s new products in 2001 and 2010,” Damodaran said. “You can’t remember any of them, right?”

The second best strategy for growth is expansion, either into a new market or by finding new users within your market. Coca-Cola and Levi’s went global in the 1980s, Damodaran explained. As for finding new users, he pointed to over-the-counter painkillers: “You know how much bigger the aspirin market got once people discovered it was potentially something you could take to not have a heart attack?”

The third most effective approach, McKinsey found, was to grow or maintain market share in an expanding market. “Think of Apple and Samsung between 2011 and 2015 in the smartphone market,” Damodaran said. “Apple’s market share actually decreased between 2011 and 2015, but their value increased. Why? Simply because the smartphone market itself was growing. When you’re in a growing market, it gives you this buffer to have your market share drop off and still grow.”

Companies can also try to increase market share in a stable market, but that is even less effective at achieving growth and is often value destructive. Because to acquire that market share, you have to cut prices. “You will get a higher market share but your margins collapse,” he said. “Your value, in fact, becomes much more unpredictable.”

‘The very bottom of the barrel’

And then McKinsey gets to the dregs, what Damodaran calls “the very bottom of the barrel.”

What is the very worst way to grow? “Go do acquisitions,” he said.

The evidence isn’t in dispute: it is piling up and pretty well disseminated. Yet the industry has yet to reach rock bottom. “This is something we’ve known for 40 years,” Damodaran said. “And as you look at M&A study after M&A study, collectively, this is not a process that creates value, and I’m afraid the disease is spreading.”

Of course, if you’re the targeted company, being acquired is a great thing. Your stock price goes up. “Targets win,” Damodaran said. “You wake up the next morning and thank God for capitalism… you will never want this process to stop. This is a gravy train that is going to keep giving.”

Why is that? Because acquiring companies tend to overpay. By a lot. “I’ve seen companies destroy 20 years of hard work in one day with one acquisition,” he said. “I remember when Eastman Kodak was a great company. It was one of the Nifty Fifty, considered an extraordinary well-managed company. Until the day they bought Sterling Drugs, a growth company in the pharmaceutical business.”

How pharma and cameras and film fit together was not especially intuitive. “They claimed synergy,” Damodaran said, “overpaid by $2.2bn and that was the beginning of the end for the company because, after that, nobody trusted them.”

Examples like this abound. And the word synergy tends to pop up quite a bit. Indeed, according to a KPMG study of about 9,000 mergers, synergy was the most often cited rationale.

“Synergy sounds magical,” Damodaran said. “But let’s put our value hats on. If there is really synergy, what is it? Where will it show up? How will I value it? How much should I pay for it, right?”

The first step is to value both the acquiring and target companies as standalones. Then add those values together. The third step is to take the combined company and add in whatever form synergy will take. That might mean a boost in revenue growth, lower cost of capital, increased market share and so on.

“Value the combine company with those changes put in, and what you should get in step three should be higher than the sum of values you got in step two,” Damodaran said. “The difference is the value of synergy. That’s it.”

So, what percentage of mergers actually have synergy?

McKinsey has made similar inquiries for the past several decades. One of the questions they ask is, Does the merger create a return on capital?

“Again, in two thirds of all mergers, the mergers fail that very simple capital budgeting question with synergy incorporated in the returns,” Damodaran said. “And here’s the most final and most damning evidence that mergers don’t work: do you know half of all mergers are reversed within 10 years?”.

Incentivised to complete the deal

Given this mountain of evidence that companies pay too much for acquisitions and that they destroy more value than they create, why are they still so popular?

Damodaran believes that the reason for this lies not in the deals but rather in the M&A process itself. “The ecosystem is full of people who feed your addiction,” he said. “Starting with consultants who come in and say, ‘Your growth seems to be levelling off. We have just the right solution for you.’”

Then the typical deal involves four players: the acquiring firm, the target firm and their investment bankers — all of whom likely are incentivised to complete the deal.

So what implications does this have for Damodaran as an investor?

In other words, just say no.

Aswath Damodaran also spoke at the 73rd CFA Institute Annual Virtual Conference earlier this year on “Go back to basics: Valuations during COVID-19”.

By Paul McCaffrey, is the editor of Enterprising Investor at CFA Institute.