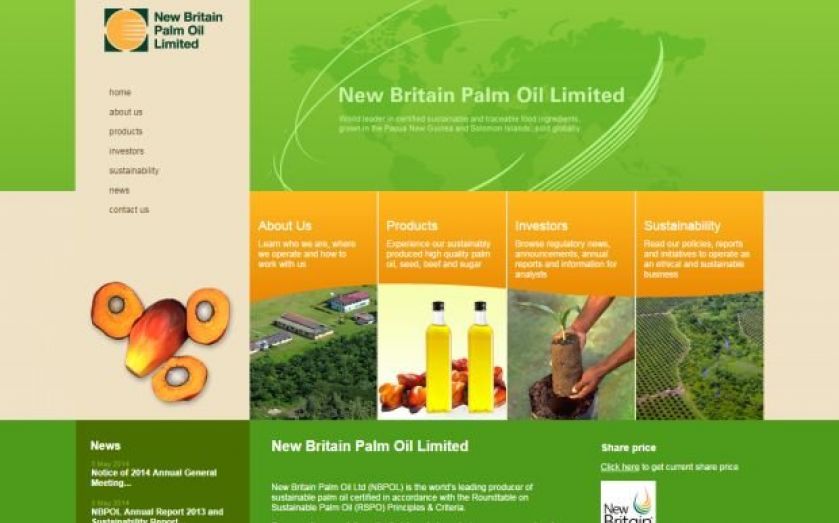 London-listed New Britain Palm Oil (NBPOL) saw its share price shoot up by almost 75 per cent yesterday after Malaysian company Sime Darby Plant­ation announced a £1.1bn (£682m) takeover bid. NBPOL, which opened a refinery in Liverpool in 2010, is based in Papua New Guinea.
Sime Darby stated last week that it would not proceed further with its proposed acquisition because the local government had not yet approved a bid.
However, Sime Darby subsequently received written confirmation from the prime minister of Papua New Guinea that the offer was not contrary to the country’s national interest.
The Malaysian company’s cash offer of 715p per share for 100 per cent of NBPOL represents an 85 per cent premium. Peel Hunt analyst Charles Hunt said: “The size of premium reflects the long-term prospects for palm oil rather than the current weakness” in its price.
Benchmark palm oil prices hit a five-year low in September at £366 per tonne, although they have since improved to £415.
The NBPOL independent board committee intends unanimously to recommend that shareholders accept the offer in the absence of a superior proposal. Analysts at Liberum said that while other interested parties might launch a competing bid for NBPOL, the requirement to secure support from the government “substantially reduces this likelihood”.

CITIGROUP | COLIN BANFIELD
1 Colin Banfield is managing director and head of M&A – Asia-Pacific at Citigroup, and has been with the company since 2010
2 He joined from Nomura, where he was head of M&A Asia excluding Japan. Prior to that he worked at Credit Suisse, and in the Asian M&A division of Lehman Brothers
3 Banfield, who is an Arsenal fan, previously advised on Chinese state-owned China National Offshore Oil Corporation’s $1.5bn takeover of Canadian oil and gas company Nexen
Also advising…
Citigroup acted as financial advisers, Clifford Chance LLP as international legal counsel, Leahy Lewin Lowing Sullivan Lawyers as Papua New Guinea legal counsel and Christopher & Lee Ong as Malaysian legal counsel