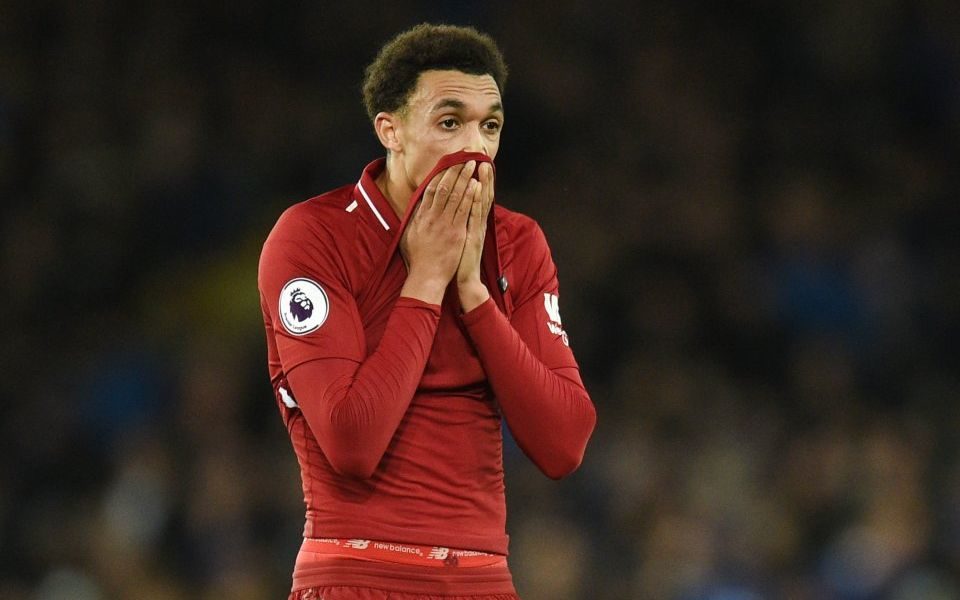 A prickly Jurgen Klopp preferred to focus on the blustery conditions inside Goodison Park after his team drew 0-0 with Everton on Sunday but there is no escaping the conclusion that the Premier League title that Liverpool so crave is slipping from their grasp.

Having fuelled hope of a first top-flight crown since 1990 by dropping just six points in their opening 20 league games, Liverpool have dropped 11 in the nine games that have followed. Of equal concern for Klopp – not that he will admit it – is that they have failed to score in three of their last four matches.

Against Everton they created openings for Mohammed Salah, who twice hesitated when bearing down on goal, and Fabinho but the fluency and irresistible energy that has been Klopp’s calling card was again absent, and the suspicion that they are over-reliant on the goals of the Egyptian and Sadio Mane only gathered credibility.

Having led Manchester City by seven points at the turn of the year, Liverpool now trail by one. It is the champions’ title to lose.

There aren’t too many players more diametrically opposed to Brendan Rodgers’ bluster and self-mythologising than Troy Deeney and Andre Gray, so there was a certain irony to the new Leicester manager’s debut being ruined by the non-nonsense Watford forward pair on Sunday.

And a glance at Rodgers’ career history suggests the 2-1 defeat should not have been a huge surprise.

At Watford, his first job, he didn’t win until his fifth match; at Reading, he took just two points from his first four league games; he lost his first fixture in charge of Swansea and his first league match with Liverpool; and in his debut in the Celtic dugout he suffered the humiliation of defeat to Gibraltar part-timers Lincoln Red Imps.

The good news? It’s struggling Fulham up next for Leicester.

If there was a silver lining to Fulham’s 2-1 defeat to west London neighbours Chelsea in Scott Parker’s first game in charge as caretaker boss, then it was further evidence of Calum Chambers’ emergence as a midfielder of Premier League calibre.

The Arsenal loanee was tidy in possession, industrious when not and capped a fine all-round performance with a composed volley that threatened – until Jorginho struck Chelsea’s winner – to earn the home side an unlikely point at Craven Cottage.

While Fulham look bound for an immediate return to the Championship, Chambers surely has brighter prospects in the top flight – perhaps, given he is the type of unfussy player that Unai Emery seems to favour, at his parent club.

Laboured, lacklustre and leggy, Tottenham narrowly avoided losing a third game in a row for only the second time in Mauricio Pochettino’s tenure as manager by dint of an injury-time penalty save from Hugo Lloris in Saturday’s north London derby against Arsenal.

How Spurs look like they could do with a rest. Fortunately, one is on the horizon; after they have navigated Tuesday’s Champions League assignment at Borussia Dortmund – a 3-0 first-leg lead should make it a formality – and next weekend’s trip to Southampton, they have a week off while the FA Cup resumes followed by an international break.

Their title hopes now seemingly gone, the priority is protecting their top-four place, and with away fixtures with Liverpool and Manchester City still to come, Pochettino will need a reinvigorated squad.

He may not play on the shoulder of the last defender as effectively as Marcus Rashford and therefore may not be as well suited to Manchester United’s renewed emphasis on pacy attacking play, but Romelu Lukaku knows how to get a shot away.

Lukaku lit up the midweek win at Crystal Palace by finding space in a crowded box to fire a clinical effort into the bottom-right corner and in United’s 3-2 thriller against Southampton on Saturday he repeated the trick – twice.

The Belgium striker is a streaky player. With four goals in his last two games, United will be hoping he carries his scoring form into Wednesday’s Champions League comeback mission against Paris Saint-Germain.