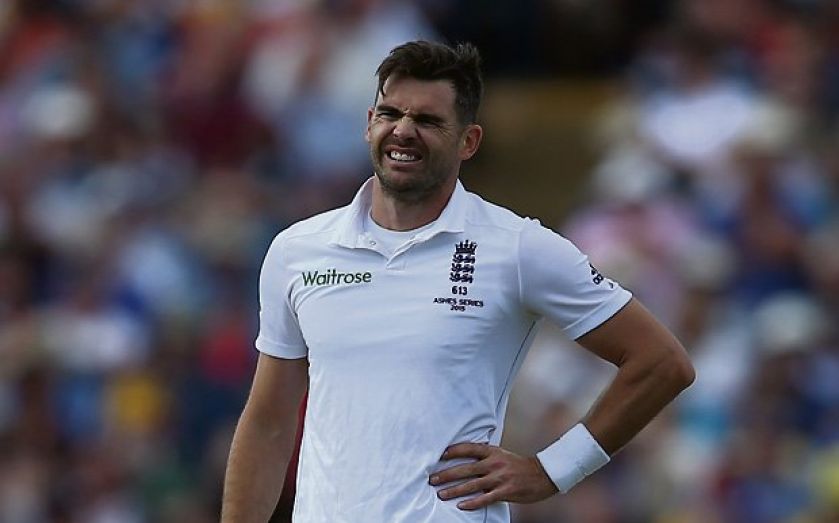 FEARS that seamer James Anderson could miss the remainder of the series soured an otherwise assertive bowling display which left England on the brink of victory in the third Investec Ashes Test at Edgbaston yesterday.

Fellow fast bowler Steven Finn continued his international renaissance with the fifth five-wicket haul of his Test career to leave Australia reeling on 168-7 in their second innings, holding a precarious lead of just 23.

But concerns persist over England’s leading Test wicket-taker Anderson, who turned 33 yesterday and was playing in his 37th successive Test, when he was forced from the field with an apparent side strain midway through his ninth over.

“James Anderson has a tight side and will be assessed overnight and in the morning. There will be an update tomorrow,” read an England and Wales Cricket Board statement last night.

Aside from the cloud hovering over Anderson, the day belonged to the resurgent Finn, who claimed 5-45 in what is his first Test match for more than two years, as England ripped through Australia.

Other than opener David Warner’s counter-attacking 62-ball 77, the tourists’ scorecard was dominated by a flurry of single-figure scores before rookie wicketkeeper Peter Nevill posted a gutsy and unbeaten 37.

Australia managed to avoid the indignity of a two-day defeat and Nevill will resume today alongside Mitchell Starc, and while England are expected to surge into a 2-1 series lead with two Tests to play, Finn has refused to accept winning is a formality.

“The game is most definitely still not won yet,” said Finn. “They have got guys who can bat coming in. Starc has got close to a Test match hundred [99] so they can bat, there will still be pressure on us and we need to make sure we do a professional job.”

Finn’s heroics marked a drastic transformation from his plight the last time England played Australia during the 2013-14 Ashes, when he was sent home early from the tour having been deemed “not selectable”.

“It feels fantastic. It has been a while since I have played Test match cricket so to come here and get a five-fer in my first game back is a really nice feeling,” added Finn.

“I had nice rhythm and felt good all game. When my first over went for 14 I was questioning where it had disappeared to but after that I settled in okay and bowled some decent balls.”

Australia’s Johnson, England’s tormentor-in-chief during the last Ashes series, conceded that his side are staring down the barrel of defeat, with big runs from Nevill and Starc the only avenue out of the mire.

“We need to get out there and fight,” said Johnson. “We need these two guys to put on a 100-run partnership and get the ball rolling. We have got to stop this rot. It’s not looking good for us but we’ve got to stay confident.”