Is God Is at The Royal Court: A fireball of rage and guilt 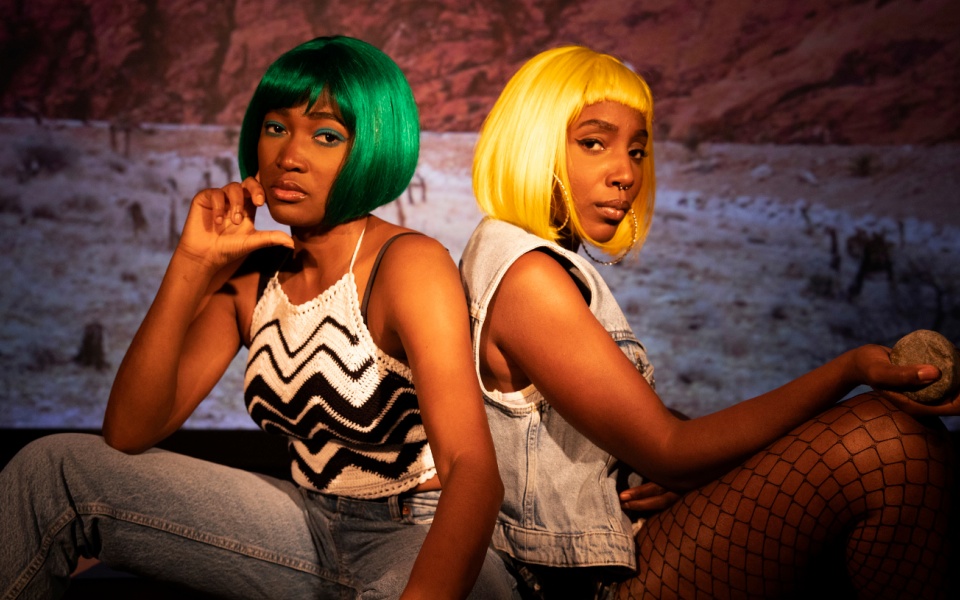 A fireball of rage and guilt, Aleshea Harris’ Is God Is is a modern-day biblical epic on a small scale. It’s a play that actively shirks categorisation, inviting comparisons to both the Old Testament and the trappings of Jacobean drama, but also to Spaghetti Westerns, Afropunk, and hip-hop.

The play begins with fire, both literally, through pyrotechnics, and by way of metaphor. Out of the blazing inferno step the protagonists, 21 year old twin sisters: the outgoing, “fiery” Racine (Tamara Lawrence), and the more reserved Anaia (Adeleyo Adedayo). Raised in a vague part of the Northeast United States – “New York or Hampshire or Jersey” – they finish each other’s sentences and are both marked by severe burns. These scars, we learn, are from a childhood incident that they had long believed had killed their mother – that is, until they receive a letter from her, calling them to the Deep South.

Reuniting with their mother sets the twins off on an unexpected quest: one of retribution, and of reclaiming the personal narrative that was taken away from them at the age of three. The early trauma suffered by the sisters is apparent in their flightiness, but also in their fury, which throbs constantly beneath the surface. Anaia is the most physically affected by the flames, her face looking “like it melted and then froze. Mostly people don’t let their eyes meet hers”. It can be difficult to take one’s eyes away from this propulsive, 90 minute play, which twists and turns unexpectedly, from horror to laughter, before going straight to the jugular.

Winner of the 2016 American Playwriting Foundation’s Relentless Award, as well as the Obie Award for Playwriting, Is God Is offers a fresh spin on the old revenge tale; questioning the truth of family folklore, betrayal, and the power of blood ties. Voices thunder and jibe, the rhythm of speech fast, the language couched in distinctive African-American vernacular.

Also Read:
The Memory of Water at Hampstead Theatre review

Ola Ince’s direction amplifies the scattershot energy of the script, while Chloe Lamford’s set design makes clever use of the tight space offered by The Royal Court’s Jerwood stage, backdrops used to signal the changing terrain as the sisters journey from the Northeast to the Deep South, and then, finally, to a hilltop above the City of Angels. At times this eagerness to explain, through the set, where the twins are in their story can grate; a crucial fight scene is heralded by a large banner emblazoned with “Showdown” – something the audience could have guessed by merely watching the action unfurl. But it’s a minor annoyance that little dispels the otherwise engrossing visuals.

American stock characters abound (the self-destructive lawyer, the depressed housewife), and serve to make the twins – with their cussing and playful, naturalistic reactions – feel all the more real. The cumulative effect of petty and brutal violence, joyful slapstick and shocking cruelty, interspersed with moments of lulling contemplation, is thrilling. While the set, the script, and the characters lend a cartoonish surrealism, the plot constantly tickles the boundaries of what we are willing to believe; just when you think you have it sussed, a moment of startling theatrical ingenuity lures you back into its grip.