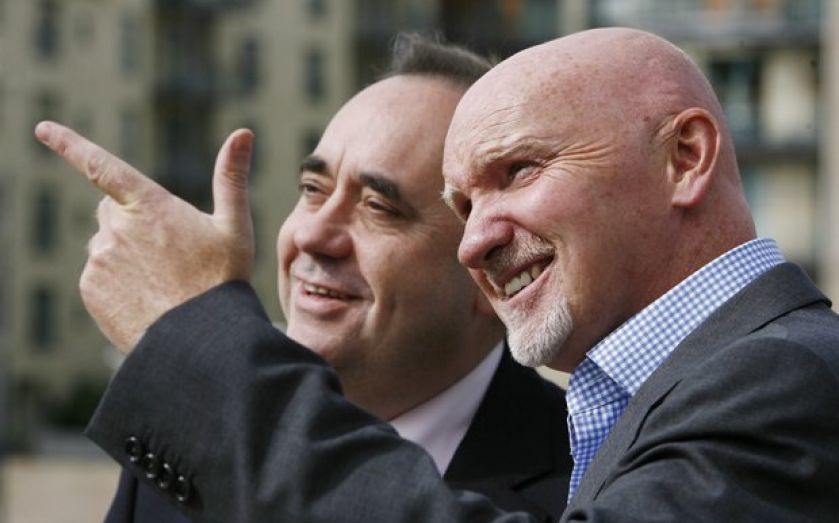 WITH the polls in chaos, and the likely result far from certain, it’s understandable that rival groups of influential Scots continue to argue the business case for and against independence. But amid all the interventions by large corporations, one important area has been neglected – what independence would mean for smaller businesses and entrepreneurs, both north and south of the border. Specifically, I’m concerned about the potentially serious fallout in terms of small business financing should our Scottish cousins vote to go it alone tomorrow.

Consider the basics. Scotland has almost 326,000 businesses, in a population of about 5.3m. It ranks second last in the UK in terms of density of private sector companies – just 740 per 10,000 adults. Entrepreneurialism is less active than in other parts of the UK: just over 30,200 new businesses were launched there last year, giving Scotland eighth place in the UK regional startup rankings. Further, parts of Scotland account for the lowest levels of business borrowing across the British Isles. Scottish small firms are inhibiting their growth by a reluctance or inability to secure funding – nine out of 10 say they are not seeking external finance, according to Bibby Financial Services. Of those looking for capital, about 80 per cent rely on banks, and have little awareness of alternative finance options.

So Scottish small and medium-sized businesses are already at a disadvantage. Under-funded companies cannot achieve their growth potential, and are at a greater risk of failure. And should Scotland become independent, this position could well worsen. The greatest concern, of course, remains currency, with HSBC chairman Douglas Flint not alone in warning that uncertainty over its continued use of the pound could prompt capital flight from Scotland.

One real possibility is that, if Scotland is forced to adopt an alternative currency (as seems likely), there could be a severe knock-on effect on business lending. And even if Scotland uses the pound unilaterally, the IMF suggests that countries that have dollarised in the past have often seen a related drop in financing for businesses, as banks have to hold more capital.

The risks to business funding and investment shouldn’t be dismissed. Scotland suffers from a large and persistent productivity gap with the rest of the UK. Contrary to arguments made by the Scottish government, a recent paper by professor Richard Harris and Dr John Moffat at Durham University Business School found that the Scottish private sector is a poor cousin when it comes to total factor productivity. It has seriously lagged the rest of the UK since the late 1990s. Fewer companies innovated, exported or did research and development than elsewhere in the UK. And Harris warned that independence could well worsen the productivity gap.

Of course, none of this is to diminish the achievements of Scotland’s business community, which are considerable. It is a country with a venerable history of entrepreneurship – Sir Tom Hunter, Michelle Mone, and Sir Brian Souter are just three of its recent business giants. It has given us the TV, the telephone, and the technology behind the microwave.

But isolation would be a great blow to Scottish entrepreneurs. The currency question and uncertainty over EU membership could damage trade, and create new barriers to entry. Many Scottish firms rely on customers based elsewhere in Britain, and currency risk will hardly make trade easier. Enterprises in England, Wales and Northern Ireland would be worse off too. About one in five of those working in Scotland is employed by a business that is English, Welsh or Northern Irish-owned.

I fear that there’s little hard evidence that the Nationalists will be able to deliver on the bold promises they’ve made to firms in Scotland, even backed by hoped-for gushing oil revenues. Lower corporation taxes to boost inward investment and greater support for new startups are good things if they can be achieved. But there is little certainty on this, especially given the overwhelming risks that still have yet to be addressed. And while there is certainly the chance that an independent Scotland would forge new business-friendly regulations, I worry that the great advances that have been made in the UK on small business regulation, specifically related to access to funding and alternative finance, could be set back seriously.

I hope that Scottish voters remember that economic stability is an essential backdrop to a functional and prosperous business environment. A more devolved Scotland that remains part of the UK could still achieve many of the aims of independence without jeopardising the health of its small firms and business more broadly. The country needs proper support for startups and access to growth funding to ensure that it can continue (and indeed build on) its great tradition of entrepreneurship.