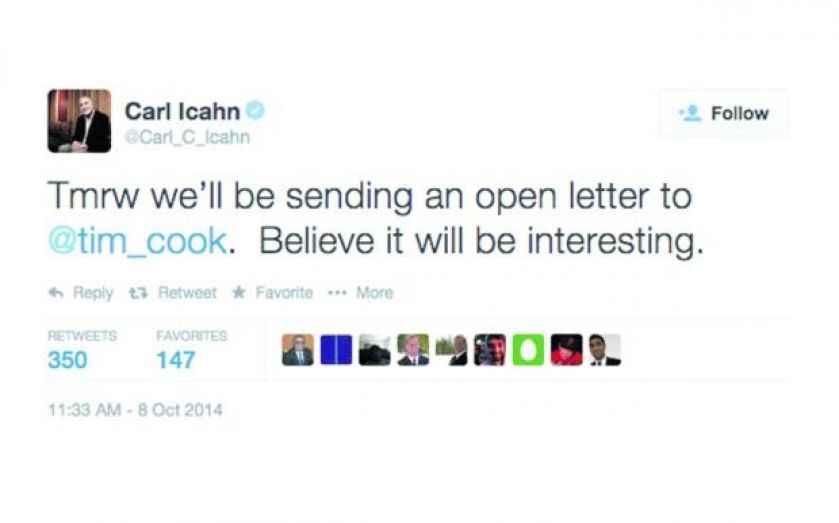 Billionaire investor Carl Icahn boosted Apple’s share price again yesterday after publishing a cryptic tweet signalling further agitation towards the US tech giant
Icahn, who boosted the value of Apple’s market cap by $17bn in August 2013 after tweeting about his holding in the company, said he would publish more details in a letter today addressed to boss Tim Cook.
“Believe it will be interesting,” he added in the tweet.
Shares in the iPhone maker rallied over two per cent to close at $100.80.
Apple’s share price has risen by more than 50 per cent since Icahn started piling pressure on the group to return more money to shareholders last year.
The firm eventually relented and launched a $30bn buyback programme and stock split.
https://twitter.com/Carl_C_Icahn/status/519918577718423552
Icahn, 78, owns businesses through his Icahn Enterprises and is chairman of the conglomerate.
He made his name in the 1980s and 1990s as a corporate raider in the US and is renowned for his shrewd business sense. He is followed by 183,000 people on Twitter.
“Some people get rich studying artificial intelligence. Me, I make money studying natural stupidity,” his Twitter profile says.
Apple is due to publish its next results on Monday 20 October.