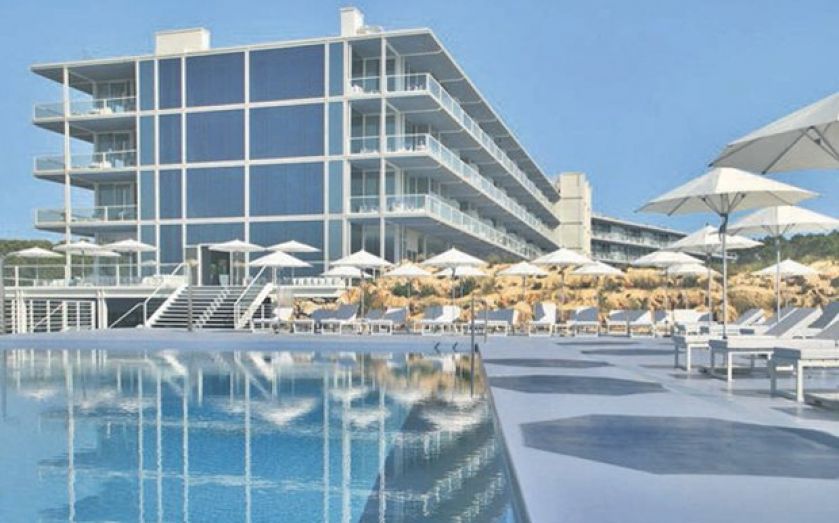 TRAVEL writing tradition dictates that a property sitting amid mountains, forestry or, in this case, the windswept dunes of Portugal’s Atlantic coast, should be described as “nestled” among its surroundings.

Not the Oitavos Hotel though. The five-star hotel near Lisbon looks like it has crash landed in the sand and grasses – a tower of glinting glass and metal framework rising above the natural setting.

For those that really want to get away from it all, a stay here has the ability to make you feel like you have journeyed to another planet rather than travelled overseas.

Designed by Portuguese architect Jose Anahory for the Champalimaud family, it was built with the ethos “less is more”.

“Our philosophy is that comfort and simplicity are the new luxury,” says Pureza Champalimaud, daughter of the hotel’s creator Miguel and marketing manager for the hotel.

The design is so uncompromising – all clean lines, windows and supersized dimensions – that it guarantees a strong reaction.

While some grumble of “Ikea-style furnishings”, others have a real passion for its stark, minimalist approach.

Standing guard at the front door – and in varying sizes around the hotel – is a brass statue of an Amazonian woman. Her unflinching stance gives the first clue to the bold architecture of this super-modern structure.

One thing the Oitavos never fails to deliver on is space. Walking in the front entrance is like arriving at the front doors of Stansted Airport. The massive room stretches back all the way to where a pristine white deck begins, featuring an infinity pool and views across the Atlantic. Pieces of furniture and art separate the “rooms” of this hangar-like construction with its floor-to-ceiling windows.

Outside, the sea breeze sweeps away the heat, leaving you free to enjoy a cool spell on the sunlounger.

The bedrooms, too, are vast, with crisp white sheets, a gigantic bed and concrete floors and walls in calming, marine blues that continue throughout the hotel.

Even the standard rooms are at least 64sqm, with a balcony overlooking either the seafront or a golf course ranked among the Top 100 in the world.

No one would think to criticise the exterior views – they’re stunning. But not everyone will be comfortable with how much is on display inside; the bathroom amenities consist of glass walls surrounding the shower and toilet, and an impressive bath that sits at the end of the lounge under a large window. Anyone with privacy issues, look away (or at least, out of the window).

There is the golf course, horse riding, surfing, an exercise class at the nearby health club or the chance to hire a bike from the hotel and pedal along the seafront to the charming coastal town of Cascais. Or you could just lie by the pool, then indulge in a treatment, steam or sauna in the spa.

Later in the day, you can eat by the pool; at Verbasco, the clubhouse of the Oitavos Dunes golf course, or at the more formal Ipsylon Restaurant in the middle of the hotel’s massive foyer.

As you might expect from a seaside hotel, there’s a lot of seafood on offer, including a Japanese bar where the in-house chef makes sushi, sashimi and unamaki so pretty they practically demand the Instagram treatment.

For a slice of history, you can visit the beautiful town of Sintra, a UNESCO world heritage site which draws daytrippers to its cobbled streets to see its spectacular Pena and Sintra National Palaces.

Lord Byron was apparently a big fan of the town, proclaiming it to be “the most beautiful in the world” in a letter to his friend Francis Hodgson in 1809.

The British poet waxed lyrical about Sintra’s charms, calling it a “glorious Eden” where you could eat oranges and talk bad Latin with the monks.

It’s hard to know what Byron would have made of the Oitavos’ uncompromising looks, stunned as he was by the historic city’s crenellated towers and sherbet-coloured buildings. But a man who took so much pleasure from eating oranges would probably have been happy enjoying a refreshing Portuguese rosé by the pool, too.

Room rates from €375 per night