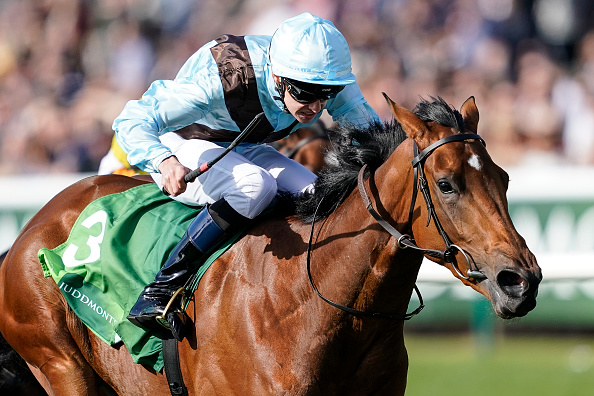 ARMCHAIR racing fans are in for a real treat tomorrow with ITV cameras showing 10 races from Newmarket, York and Ascot.

The pick of the action comes from Headquarters with the Group One Darley July Cup (4.40pm) taking centre stage.

You cannot keep that man Frankie Dettori out of the headlines and he holds leading claims of another big race success aboard Advertise.

The pair teamed up at Royal Ascot to land the Commonwealth Cup and once again shouldn’t be far away.

Ten Sovereigns could only manage fourth behind Advertise that day, but is likely to get a lot closer on the forecast faster ground.

To be honest, both are likely to struggle to beat Dream Of Dreams who was unlucky not to chin Blue Point in the Diamond Jubilee Stakes last time.

He looks a different horse this season and deserves his place at the head of the betting at 7/2 with Ladbrokes.

Regular followers of this column will remember that I tipped Brando in this 12 months ago and he ran a cracker to be second at 14/1.

Kevin Ryan’s seven-year-old is high on my shortlist again and won’t be far away at a decent price.

However, he was beaten by a three-year-old 12 months ago and I fancy history to repeat itself.

You have to go back to Habibti in 1983 to find the last three-year-old filly who won the July Cup, but I reckon Aidan O’Brien’s FAIRYLAND is overpriced at 12/1.

She ran a cracker in the 1000 Guineas over a mile, a trip that clearly stretched her, and then found the five furlongs of the King’s Stand too sharp last time.

Amazingly she actually ran really well behind Blue Point that day, running on late to only be beaten three lengths.

Six furlongs on fast ground looks just what she has been crying out for and she can mix it with the leading fancies.

While on the subject of re-writing the record books, no nine-year-old has won the Bunbury Cup (3.30pm) since records were kept in 1962, but I am hoping that will change with SO BELOVED at 20/1 with Ladbrokes.

David O’Meara’s grand old campaigner has run some eye-catching races already this term and followed a good second to Cardsharp at York in May by finishing ninth in the Royal Hunt Cup at Ascot last time.

That doesn’t tell the whole story though as the combination of soft ground and a mile stretched him to the limit and the return to seven furlongs and quick ground should see him in a far better light.

He has slipped down to a mark of 104 which is very workable when you consider that this time 12 months ago, he was competing in Group One contests.

Spanish City is 5lbs higher in the weights than when second in this last year and he is bound to be thereabouts once again.

The problem is he hasn’t won in eight starts since last June and tomorrow is likely to be the fourth time he has been sent off favourite in that time.

Instead, I am going to take a chance on Jane Chapple-Hyam’s AMBASSADORIAL at 9/1 with Coral.

The five-year-old bolted up at Chelmsford on his stable debut last month and could still be well ahead of the handicapper.