Families wanting to buy a ski apartment without the hefty price tag of the best-known French resorts are finding smaller ski areas like Samoëns are a breath of fresh mountain air.

An hour by car from Geneva, Samoëns is described by the French as one of their monuments historiques – that just happens to be attached to a great ski area. This ancient village, famed for its stonemasons, is part of the Grand Massif ski domain and is connected to high-altitude, snowsure Flaine.

Consisting of five resorts – Samoëns, Flaine, Morillon, Sixt and Les Carroz – the Grand Massif offers 265km of piste. The centre of Samoëns is traffic-free, and the town boasts a beautiful square dominated by a magnificent lime tree and a nearby botanical garden, La Jaÿsinia, with more than 5,000 plants.

For the self-caterer, the main street is a delight, full of gourmet shops offering mountain ham, local cheese and mouth-watering pâtisserie. There’s a local market every Wednesday and a handful of Savoyard interior design shops.

The only drawback to the village is that you can’t ski directly back to it (you take the telecabine down). However, you can ski to the next village, Morillon, and catch the ski bus back to Samoëns, which takes 10 minutes.

The resort’s longest run is the 14km Les Cascades (blue) from Grandes Platières (2,480m) to Sixt via the Lac de Gers refuge. For the beginner and intermediate the skiing is ideal and there’s plenty to satisfy the expert, including the Gers bowl, with an 800m-drop of untracked skiing.

With this sort of appeal, it’s no surprise Samoëns is attracting huge investment, with a new Club Med Grand Massif Morillon having opened in 2017 and a development of luxury flats built by MGM currently for sale.

Yet compared to larger French resorts, prices have remained affordable in Samoëns. A recent report by estate agent Savills revealed Val d’Isère remains the most expensive place in the Alps, with an average property price of €20,600 (£18,400)psqm. In Samoëns, an apartment at a new luxury development will set you back £5,100psqm.

Developer MGM opened the latest of its developments in December. The luxury development, called Alexane, consists of 26 freehold flats – all sold – and 31 leaseback apartments, of which 14 are still available to buy.

The five-star residence comes with access to a leisure complex that includes a swimming pool, jacuzzi, sauna, steam room, plunge pool and a sensory shower.

There’s also a spa offering a variety of treatments, including full body massages, along with a games room. Additionally, there is a bar and a grand piano, perfect for jazz nights. 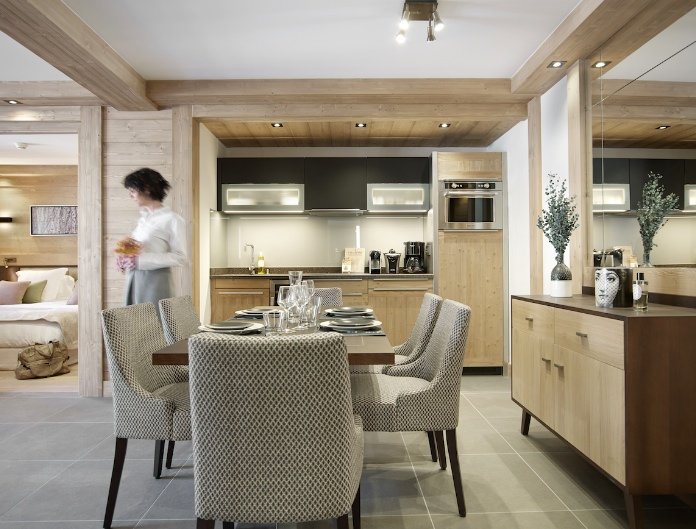 Inside the Saskya apartment

The nearest ski lift is the Grand Massif Express gondola, which is 200m from the town centre, but flat owners also have exclusive use of a minibus.

The leaseback deal gives buyers outright ownership, with the proviso they lease it back to the developer for a minimum period.

It then rents it out and organises everything involved in the process, leaving those who own the property to enjoy it for two-to-six weeks a year and receive a small twice-yearly rental income. There is also the possibility of using it 28 days out of season.

Prices on the remaining leaseback flats at the MGM development in Samoens range from €245,000 (£215,000), for a one-bedroom flat to €625,000 (£567,000) for the last remaining four-bedroom flat. Buyers comprise around 60 per cent French and the rest are split between British, Dutch and Belgian families.

One of the perks offered by MGM is that it is possible to buy one of its leaseback flats in Samoëns and swap your rental weeks for one in a different – and more expensive – ski resort such as Chamonix for no extra cost if it is available.

Richard Deans, UK sales manager at MGM, said while Brexit had initially dampened interest from Brits, the market had picked up again. 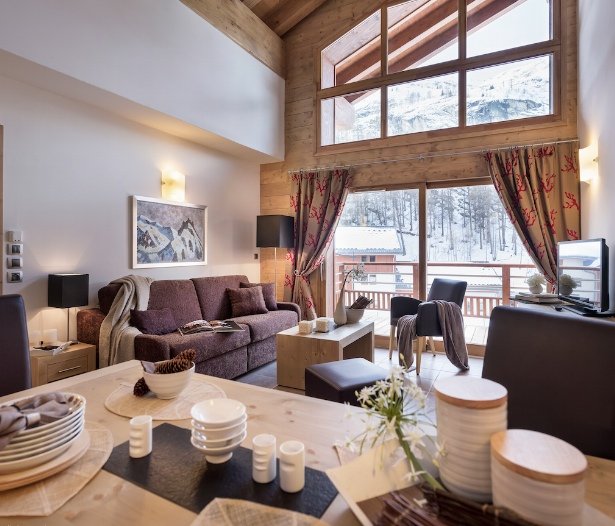 Inside the Alexane apartment

“Last year I noticed a real break as a result of Brexit, but bizarrely this year there seems to be renewed appetite and actual decision- making, with a boost in sales.

“I think there ultimately there will always be a love affair with France and the Alps so, regardless, people will buy there.” The centrally located apartments offer a modest one per cent ‘guaranteed’ rental income after charges.

The guarantee is provided by MGM, which also manages the properties while they are let for the duration of the lease, which has an initial term of 11 years. Buyers have the option of changing the number of weeks they use the apartment every three years within the contract.

There are purchase charges of three per cent of the prices, which covers stamp duty, land registry fees, solicitors’ fees and administration costs. Investors can reclaim the French equivalent of VAT (known as TVA and charged at 20 per cent). However, to do this, they must use the leaseback purchase option and let the apartment they are buying.

That is already a requirement of the leaseback flats on this development and so the VAT rebate is already factored in – in other words, the price (in euros) is exclusive of VAT.

Running costs depend on the size of the apartment. It works out at €27psqm a year, meaning the service charge on a 60sqm two-bedroom apartment would be €1,620 a year.

There are also local taxes that need to be paid, which equate to around €12psqm a year of €2,500psqm a year on a two-bedroom flat. The rental yield is based on an income generated of €5,000 a year before charges for a two-bedroom apartment on this option.

Therefore, the income will be lower than on the three or four-week options, which generate a rental income of €6,000 a year.

Deans stresses that buyers should realise that they will own the property outright despite agreeing to lease it back to MGM. “This isn’t timeshare. It is like a timeshare in the sense that you can use different developments, but it is different from timeshare because you own 100 per cent of the freehold. ­­“

With a no-hassle deal like that, how can you refuse? See you on the slopes.