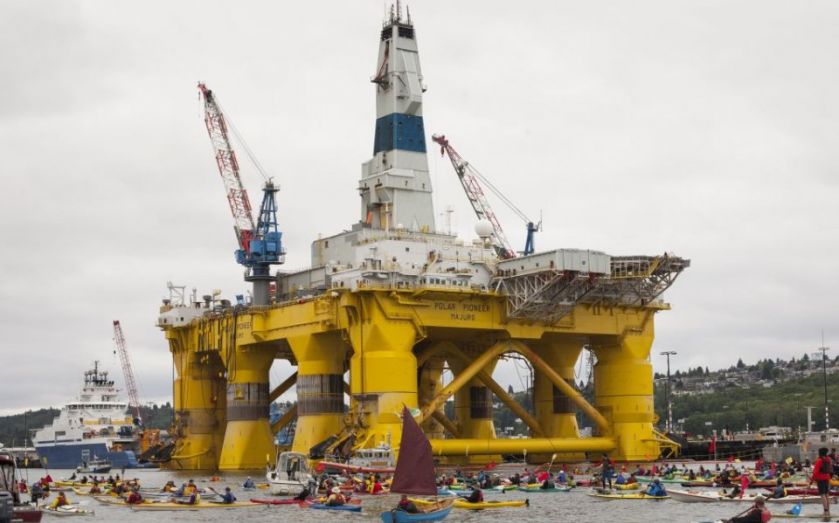 Royal Dutch Shell has halted oil exploration in the Arctic, after a $7bn (£4.6bn) quest failed to yield enough crude to justify continued spending.
The venture has been a “very costly error” and will damage the company both financially and reputationally, according to Deutsche Bank analyst Lucas Herrman.
Shell said it is likely to take a further $4.1bn hit as it withdraws from searching the area, which is in the Chukchi Sea off the coast of Alaska. Its ill-fated explorations in the Arctic region were also put on hold in 2012 when a drilling rig broke free.

Shell had selected a natural basin that appeared likely to be an oil hotspot. But although the company said it had found “indications of oil and gas” in the area, it was not enough to warrant further exploration. It also cited the high cost of the project alongside “challenging and unpredictable” regulation.
There are believed to be vast quantities of oil in the Arctic – Shell estimates there are 400bn barrels of untapped oil, which translates into 10 times the amount that has been produced in the North Sea to date. This could be worth billions if only it could be reached. But getting anywhere near these hidden reserves is hugely costly, as Shell has learned the hard way.
Read more: Royal Dutch Shell to cease Arctic drilling
The whole saga will mean the company is likely to announce a huge write-down in its third-quarter results, released today.

With oil prices still low a year after they were halved from $100 a barrel of Brent crude down to under $50, every part of the industry is under strain.
Share prices across the sector have slumped, with Shell down 36 per cent in the past year and BP down 26 per cent. The chart below shows how £1,000 invested in a basket of oil company shares on the FTSE 350 would have been reduced to £775 in the past 12 months.

Shares in oil companies have fallen so far that some experts are now suggesting the market has overreacted. “They are in danger of becoming under-owned,” says David Miller of Cheviot.
The biggest risk now is further falls in the oil price. The direction of oil is impossible to predict, but some experts think prices are set to stay low. China’s slowdown could keep demand low, and Iran is also hoping to get its oil back on the world market as soon as possible – as it needs the money. Oversupply on the world market could persist through next year, and investment bank Goldman Sachs has predicted the oil price could halve again, down to $20 a barrel.
Read more: Oversupply and China's slowdown worsen Brent crude and WTI's slide
Geopolitics is a huge factor in oil supply, and the Organisation of Petroleum Exporting Countries has openly spoken of its resolve to keep its production levels high and force US competitors out of business. Russia, too, is worse off from cheaper oil. “Oil prices are destined to stay relatively low. There’s a cynicism to my view, and that’s because it is hurting Russia,” says Jonathan Webster-Smith of Brooks Macdonald. “[Opec] are happy to have Russia feel the brunt.”

Oil giants have also been criticised for lavish spending. When times were good and oil was above the $100 mark, many took on extravagant exploration projects in the belief that high oil prices would justify taking oil out of hostile and inaccessible terrain.
Total capital expenditure across the industry tripled from 2005-2014, according to a study by EY. And because of continuing cash tied up in these kinds of projects, during 2014 capex actually increased to $200.2bn, the report found.
However, there has been re­structuring and cost-cutting across the industry during the last year. Shell’s decision to cut its losses and pull out of costly exploration is a case in point. The industry may have finally woken up to more sensible spending.

When stocks are falling, the big debate is always whether they have further to slide or have reached their bottom. To some experts, too many variables are suggesting the worst is not over for oil companies. “Do you want to catch a falling knife? Well this knife is falling pretty fast and it’s a sharp one,” says Angus Campbell of FXPro.
“Successful investors get into a sector which is totally unloved, when the sentiment is so low it can’t get any worse. I don’t think we’re there yet.”
But some believe oil price forecasts are overly bearish. When the oil price has already been low, and companies have been forced to cut back production, the odds are prices will rise. Oil majors Shell and BP remain well capitalised, and Shell still pays out a good dividend which it is committed to paying. “To me, I would buy. I would a be a buyer,” says Webster-Smith.
Share: