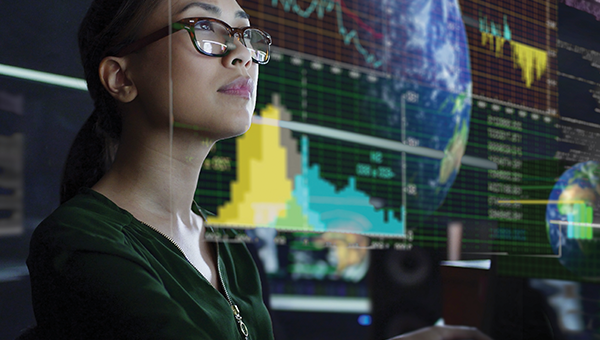 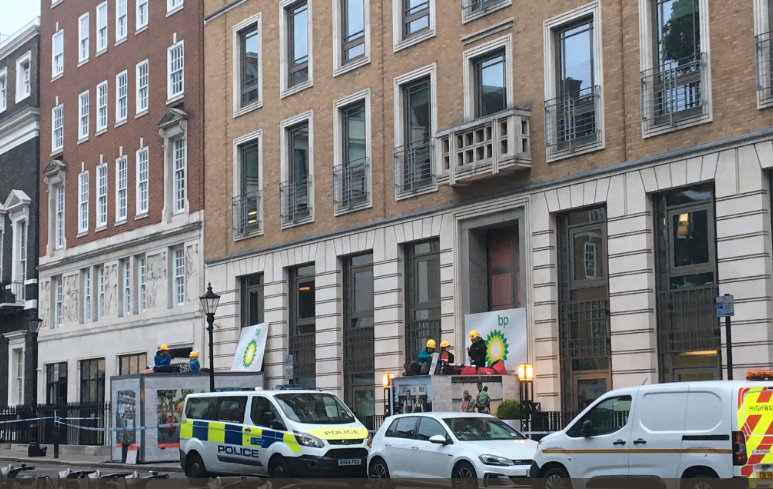 Environmental protesters have blockaded BP’s central London headquarters this morning as they claim “this is a climate emergency”.

Greenpeace activists have set up five steel containers outside all entrances to BP’s offices in St James's Square, W1.

On Twitter, the group said: “Volunteers have set up camp inside 5 containers blocking the building’s entrances. This is a #ClimateEmergency and there is no place for companies like @BP_plc in our future.”

Police talk to Greenpeace protesters on one of the containers weighing several tonnes positioned outside BP's offices this morning (Source: Jiri Rezac and Greenpeace)

“BP can’t continue as if it’s business as usual in this #ClimateEmergency we’re in,” they said in another tweet.

Activists set up the blockades overnight, with a second tweet containing pictures showing protesters sat on top of the containers with police on the scene.

“Police were called to St James’s Square SW1 at 04:07hrs on Monday, 20 May following a report of protesters scaling a building,” the Metropolitan Police said.

Officers have not yet made any arrests and roads remain open.

Police said they had made no arrests this morning as the protesters blocked BP's headquarters at St James's Place (Source: Jiri Rezac and Greenpeace)

“We’ve shut down @BP_plc’s HQ because business as usual is just not an option. They are fuelling a #ClimateEmergency that threatens millions of lives. BP must clean up or clear out #BPshutdown,” Greenpeace UK said.

“They're acting as if the #ClimateEmergency isn't happening. Instead, BP is investing billions in new oil and fueling the crisis that will harm billions,” the organisation added.

Paul Morozzo, Greenpeace activist and container occupant said: “We're shutting down BP’s HQ because business as usual is just not an option.

Activists constructed the blocks overnight in an operation designed to fuel pressure on the oil giant a day before it faces shareholders at its annual meeting (Source: Jiri Rezac and Greenpeace)

“BP is fuelling a climate emergency that threatens millions of lives and the future of the living world. The science is clear – we must stop searching for new oil and gas if we want a liveable planet. BP must clean up or clear out.”

A BP spokesperson said: “We welcome discussion, debate, even peaceful protest on the important matter of how we must all work together to address the climate challenge, but impeding safe entry and exit from an office building in this way is dangerous and clearly a matter for the police to resolve as swiftly as possible.”

Activists were set to abseil from the top of the building to vandalise windows with letters spelling out ‘climate emergency’ across the facade of BP#s headquarters.

Along with Shell, BP has vowed action on the Paris climate change agreement by bolstering the link between executive pay and climate targets once they are set in 2020.

BP took the step of linking 36,000 workers’ bonuses to climate targets in February.

Tomorrow it is expected to outline how it will honour the Paris agreement, but Greenpeace said it is expanding oil and gas production when it must be “dramatically reduced”.

The blockade follows two weeks of central London protests over climate change organised by extinction Rebellion, which saw key travel routes in the capital – including Waterloo Bridge, Oxford Circus and Marble Arch – brought to a standstill by thousands of activists.

They also targeted the London Stock Exchange and Canary Wharf Station, glueing themselves to the LSE and also to two Docklands Light Railway trains.

Police made more than 1,000 arrests and almost 70 people were charged in connection with the disruption.

Invest in green energy, urges minister, as financial risks of climate change 'too important to ignore'