The government has set out plan of action to bring more fusion power and technology to the country today, which could help decarbonise the UK’s energy sector.

The UK is looking to muscling in on a leadership position in the development of fusion energy globally, as the power does not have to rely on wind levels to produce vast amounts of energy in a relatively ‘clean’ way.

“Fusion could be the ultimate clean power solution, representing a low carbon, safe, abundant and continuous and effectively unlimited source of energy,” the paper, issued by the Department for Business, Energy and Industrial Strategy (BEIS), said.

The type of power, born from a reaction that is found at the centre of stars and is also the source of light and heat emitted by the Sun, is “effectively inexhaustible”, the paper added.

While fusion power plants are not also expected to generate the very long lived, high level radioactive waste that is produced with more traditional nuclear fission.

The strategy for the low-carbon, regenerative power, comes ahead of the UN’s flagship climate conference COP26 in November.

“It is well established that we need to decarbonise the global energy system,” the paper said, as the link between the carbon-fuelled economy and the climate crisis and increased levels of extreme weather conditions, melting ice caps and acidification of the planet’s oceans has never been clearer.

The connection had also been made by prime minister Boris Johnson when he launched the UK’s presidency of COP26 in February last year.

Though the government also wants to use the emerging energy as one of its post-Brexit selling points, to have a fusion industry “that can export UK-developed fusion technology around the world”.

To build such an industry, the UK plans to collaborate more on an international level, while doubling down on its scientific research to make fusion energy a commercial product like wind, solar and fossil-fuel based power.

But the strategy cautioned that the challenges of fusion remain considerable, with it still being in the early stages of its development, commercialisation and regulation.

“As with any technically demanding goal, there will be setbacks,” the paper explained.

“However, advances in fusion science and engineering capabilities mean that there is increasing confidence in the fusion sector’s ability to overcome these.”

The paper is due to undergo a consultation until Christmas Eve. 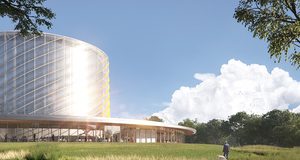