The FTSE 100  fell below the psychologically significant 6,000 mark this afternoon for the first time since 2012, after stocks in China closed more than eight per cent lower.

The market dipped below 5,900 points, more than five per cent lower, at lunchtime, its lowest point this year.

Meanwhile, Germany's Dax fell 4.5 per cent and France's Cac 40 dropped 5.2 per cent. Overnight, markets in Asia were all casualties of heavy selloffs with the Nikkei falling 4.6 per cent, Hong Kong's Hang Seng falling 5.2 per cent and the Shanghai Composite falling 8.5 per cent, its biggest one-day loss in percentage terms since 2007.

The selloff led Bloomberg analyst Mark Barton to suggest $3.2 trillion (£2 trillion) had been wiped off global stocks in the past five days.

$3.2 TRILLION has vanished from the value of global stocks in the past 5 days… pic.twitter.com/9ofoN6OJQB

Meanwhile the Vix volatility index, also known as the "fear index", has jumped to the highest level in years this morning, as has its European counterpart.

The selloff came after a chaotic day of trading on Friday, when weaker than expected manufacturing data caused European markets to plummet. The FTSE closed 2.8 per cent lower, while the S&P 500 crashed below 2,000 points for the first time since February this year.

Markets had spent the past few days falling steadily, as investors worried the Chinese central bank would stop its support of the stock markets.

"Many market participants were expecting that their prayers will be answered over the weekend after they suffered heavy losses last week and the People's Bank of China (PBoC) will trigger more quantitative easing and will reconfirm their support," said Naeem Aslam, an analyst at Avatrade. 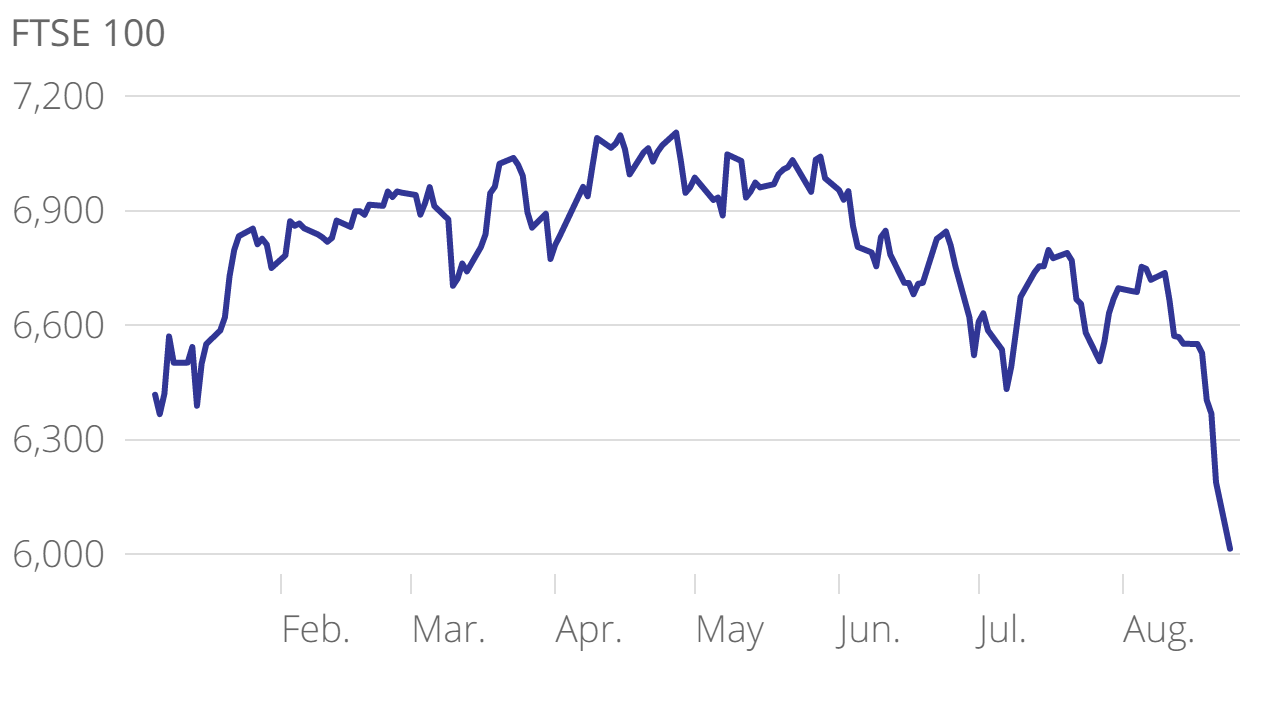 "Unfortunately, there was nothing but disappointment and trader's angst turned into anger this morning and they decided to liquidate their position causing a more intense sell off in the market."

However, some analysts saw upsides.

"As yet, it is difficult to identify a positive catalyst to alter sentiment in the shorter term," said Richard Hunter, head of equities at Hargreaves Lansdown.

"However, for the US and UK economies, which are both showing some strength as evidenced by the mere discussion of interest rate rises, and with a perfectly respectable set of second quarter results behind them, these recent falls may just have opened a window of opportunity for those looking to enter the market.

"Indeed, the 2015 mantra of markets looking stretched on valuation grounds is now redundant, and more cautious investors may still benefit from the 'bottom up' method of investing we have been advocating for some considerable time.”