The Franco-German push for EU integration may backfire 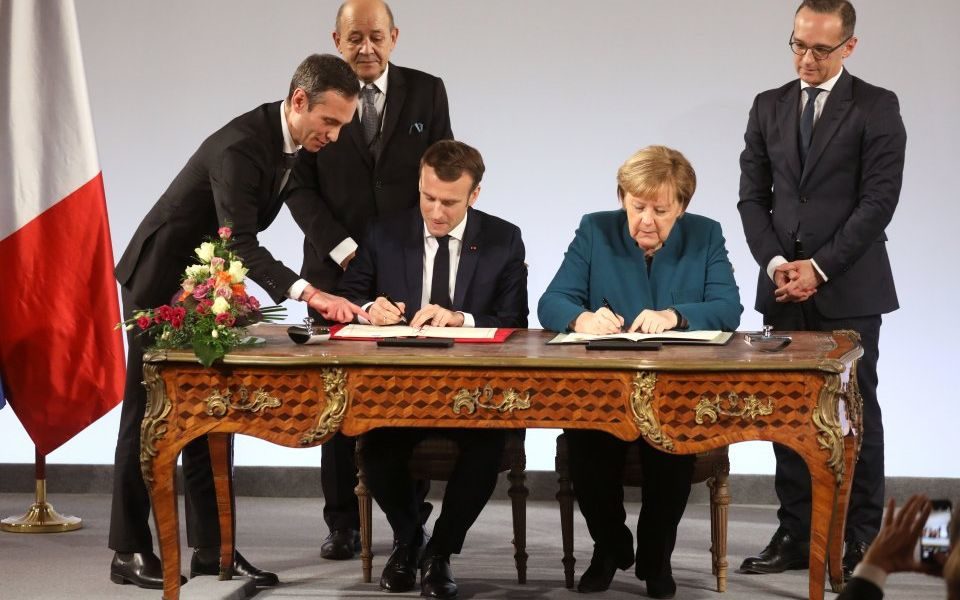 Amid the turmoil of the Brexit process, it is perhaps understandable that British eyes have not been focused much on recent developments within the European Union.

After all, nobody is particularly interested in changes in a club when their membership is about to lapse.

But just as we are preparing to set the seal on our departure – whatever that may end up looking like – the EU itself is being forced to confront the underlying currents that swept the UK out of it.

The end result, in typical EU fashion, may well end up making the internal divides permanent.

Ironically, the sort of two-speed EU that the UK would likely have been happy to remain within the folds of could soon become a reality.

If you are looking for evidence to back up this bold claim, look at an event this week that should have signalled greater European unity: the signing of a new Franco-German Treaty in Aachen on Tuesday.

In what was heralded as a “renewal of vows” between the two traditional engines of European integration, France’s President Emmanuel Macron and Germany’s Chancellor Angela Merkel committed their nations to deepening ties in a number of key areas.

Henceforth, France and Germany will seek to establish common positions on a range of internal and external issues, and to put out joint statements on major economic and political developments.

A Franco-German economic zone will drive economic integration, while a joint defence and security council will attempt to harmonise military relations and deployments and lead the push for a European army.

The two powers will act in concert at the United Nations. Closer to home, bilingualism will be pushed, and cross-border links will be promoted in an attempt to foster a seamless transition between national territories.

Symbolism was rampant at the signing. The spirit of the Elysee Treaty of 1963, when Charles de Gaulle and Konrad Adenauer buried years of Franco-German enmity, was invoked. Even the location – the seat of power in Charlemagne’s Holy Roman Empire, which Eurocrats see as the mythological forerunner of their own project – was chosen to send one clear message to EU doubters: federalisation is back on the agenda.

In Merkel’s words, “we want to give an impulse to European unity”.

If that was the goal, it hasn’t taken long for the cracks to show. The treaty text itself was heavy on rhetoric, but short on detail on how its lofty aims are to be achieved.

Set against the standards of what was once promised by Macron as the cornerstone of his EU reform programme – a common Eurozone budget – the treaty is a disappointment. Even its supporters acknowledge that it is more a statement of intent than a great leap forward in European state planning.

This scepticism was exacerbated by the prime actors themselves, who looked diminished rather than commanding.

Macron’s capitulation to the gilets jaunes and his inability to break the power of the street and enact essential reforms puts his presidency on course to be France’s third failed administration in a row.

Merkel, meanwhile, has been forced from her party leadership on account of disastrous electoral performances over the past year. Her departure as Chancellor will be sooner rather than later.

And the day of reckoning is nearing. This May will see European elections that threaten to result in eurosceptic populist parties becoming the largest force in pan-European politics.

One of the populists’ pin-ups, Italy’s interior minister Matteo Salvini, announced on the day that the final treaty draft was released that “it is time to oppose the Franco-German axis with an Italian-Polish axis”.

He was on a visit to Poland, whose own nationalist government, along with that of Hungary, has repeatedly been at odds with France and Germany’s vision for Europe.

Even within France – where, let’s not forget, an anti-EU populist reached the presidential run-off – the treaty has been used as a spectre to invoke the 1870 annexation of the French Alsace-Lorraine border region by the German Empire.

Pan-European euroscepticism is surely not the type of unity that Macron and Merkel were hoping to foster. But their push for further integration as an answer to the sorts of sociological and economic trends that helped provoke the UK’s Brexit decision, and which are sweeping the continent, will exacerbate divisions rather than heal them.

If they succeed, the European Union will surely split into two, as the Eurozone and non-Eurozone go their separate ways in a fundamental disagreement over sovereignty.

If they fail, the whole project will potentially collapse – for without traction in some direction, the EU risks being overwhelmed by the sum of its contradictions.

Either way, Brexit Britain may soon be confronted by a European continent which, in part if not in whole, resembles the looser relationship that the British people would doubtless have supported in the referendum of 2016. If only it had been on offer.