Facebook has ditched its trademark blue banner as it re-centres its tools around privacy following a year dogged by data scandals.

Chief executive Mark Zuckerberg last night revealed plans to up his social network's focus on private messaging and groups, with a raft of redesigned features to pivot the platform towards a more private experience.

Key changes will include a new app and website design that sees Facebook ditch its signature blue design, less emphasis on users’ news feeds, and a larger groups tab on the homescreen.

Meanwhile Facebook Messenger will now have a way to watch videos with others.

There will also be a “Meet New Friends” feature to connect strangers who share things in common, such as a university or employer. 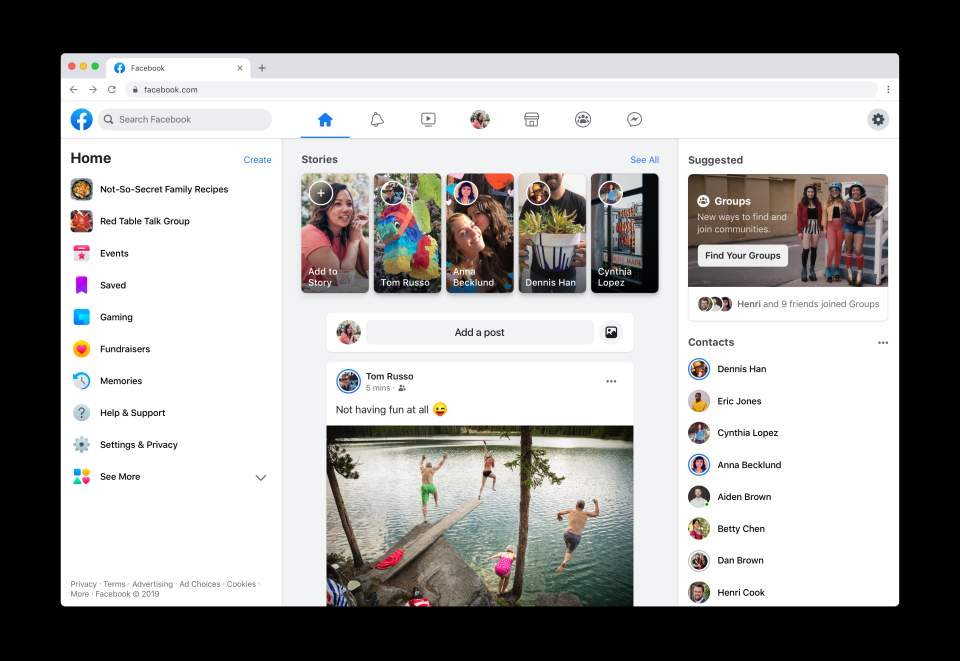 How Facebook's redesign will appear to users (Source: Facebook)

Facebook is bracing itself for a $5bn financial hit in fines and legal costs after a slew of data privacy issues.

The Irish data regulator is conducting 10 separate probes into data protection incidents concerning the tech giant's European operations, and the company recently confessed to a blunder in which 1.5m users' email contacts were uploaded online.

Meanwhile the social network is contesting a symbolic £500,000 fine issued by the UK's data watchdog over the Cambridge Analytics scandal, which saw 87m users' personal data scraped to be targeted in Donald Trump's 2016 presidential bid.

Speaking at the company’s annual developer conference in San Jose, California, Zuckerberg addressed the privacy concerns head-on, saying: “I know we don't exactly have the strongest reputation on privacy right now, to put it lightly,” before adding: "I am committed to doing this well."

Perhaps the most significant potential change is a removal of likes, with Instagram trialling the hiding of likes on its feed, permalinked pages and on profiles, in order for followers to “focus on the photos and videos you share, not how many likes they get”.

Instagram users will have a new camera design within weeks, and companies and influencers on the platform will be able to tag products in their posts and stories that followers can then buy instantly through the app.

Read more: In 50 years, dead users will outnumber the living on Facebook

Whatsapp is also getting a new shopping feature, with a secure payments function and in-app product catalogues to be rolled out after being tested with over one million users in India.

Interoperability between Facebook’s stable of platforms is also on the horizon, and speaking at the conference Asha Sharma, Facebook Messenger’s head of consumer product, said that users will in the future be able to send messages seamlessly across Messenger, Instagram and Whatsapp.