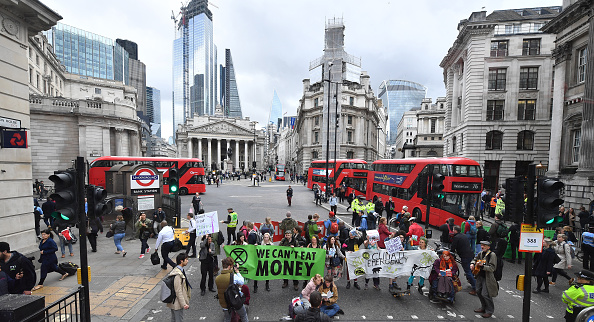 Extinction Rebellion have threatened to disrupt London Fashion Week, saying the annual star-studded event is a huge risk to the environment.

Activists warned they “must take matters into our own hands” if the British Fashion Council does not cancel the show.

The climate change protest group – which has glued itself to the London Stock Exchange and blocked London traffic hotspots – said it will disrupt business during the event, due to run from Friday, 13 September until Tuesday, 17 September.

“We understand that the British fashion industry is trying to change its ways,” Extinction Rebellion member Sara Arnold said.

“But Fashion Weeks are fundamentally at odds with the urgent need to stop needless consumption and to direct resources to regenerating nature. Humanity cannot afford for London Fashion Week to continue.”

“If the BFC will not cancel London Fashion Week, then, for the sake of all life, we must take matters into our own hands,” added Martina Sorghi, a member of the group’s Fashion Action division.

“Through non-violent resistance, we will disrupt the ability for business as usual to carry on, using visual, performative disruption to show the industry for what it is.”

Rush has offered to meet the group and replied: “We are facing a climate change emergency and all need to act.”

However, the protesters plan to “go ahead with disruptive actions during London Fashion Week until we see emergency action taken”.

In its letter to the BFC, Extinction Rebellion wrote:

London Fashion Week sets a global precedent. It creates the desire that results in the consumption of fast fashion and beyond. Fashion should be a cultural signifier of our times, and yet the industry still adheres to an archaic system of seasonal fashion, adding pressure to relentlessly create new fashion from new materials. The embodied emissions, as well as damaging cultural resonance of fashion weeks, is not something the planet can afford.

Read more: Does Extinction Rebellion care more about capitalism than the climate?

There are many parts of your letter that I wholeheartedly agree with. These are extraordinary times; we are facing a climate change emergency and we all need to act.

London Fashion Week has become a platform, not just for highly creative businesses that lead the world in terms of design innovation, but also a platform to discuss societal issues form access to education to diversity and inclusion, and in this case climate change. It is an important platform to communicate to a broad global audience of both trade and the public.