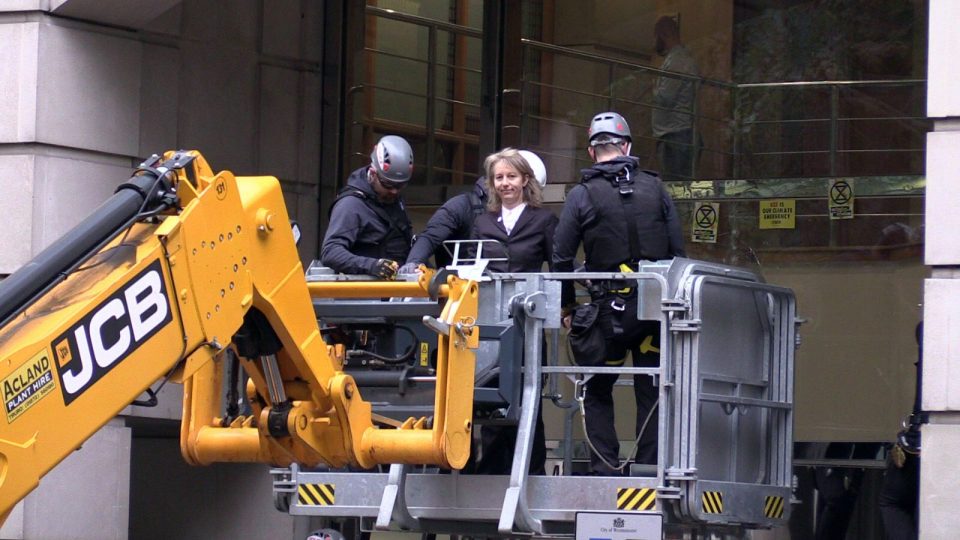 The co-founder of Extinction Rebellion has defied a police ban on the group by protesting on top of the Department for Transport (DfT).

Dr Gail Bradbrook stood on a cherrypicker at the top of the department this morning, blocking the entrance.

She used a hammer to smash a window in an apparent homage to suffragette Emmeline Pankhurst.

She was arrested shortly after the incident.

“Emmeline Pankhurst said there is a noble art to window smashing,” she said.

The 47-year-old’s stunt came after the Metropolitan Police cleared away Extinction Rebellion’s campsite last night and banned the group from continuing its London protests.

Deputy assistant commissioner Laurence Taylor said: “These conditions have been imposed due to the continued breaches of the section 14 condition previously implemented, and ongoing serious disruption to the community.”

Activists indicated they would continue their ongoing protest action.

Bradbrook said she was at the DfT building this morning to call out the controversial High Speed 2 (HS2) rail project.

She said Extinction Rebellion and other environmentalists would disrupt the project in the future.

“We need to be repairing the harm [to the environment], but instead we’ve planned this monstrosity of HS2, which is set to destroy massive woodlands at a massive cost to the british public,” she said.

“Those costs will only escalate because people like me and local residents will chain themselves to the trees.”

Protesters were active in the City of London yesterday as they blocked the roads around the Bank of England and Bank station.

They also attempted to blockade Square Mile institutions, such as the Walkie Talkie building and Blackrock.

Latest figures from the Met reveal that almost 1500 arrests have been made since the group started protest action last week.

Ninety arrests were made yesterday during the group’s protests in the City.