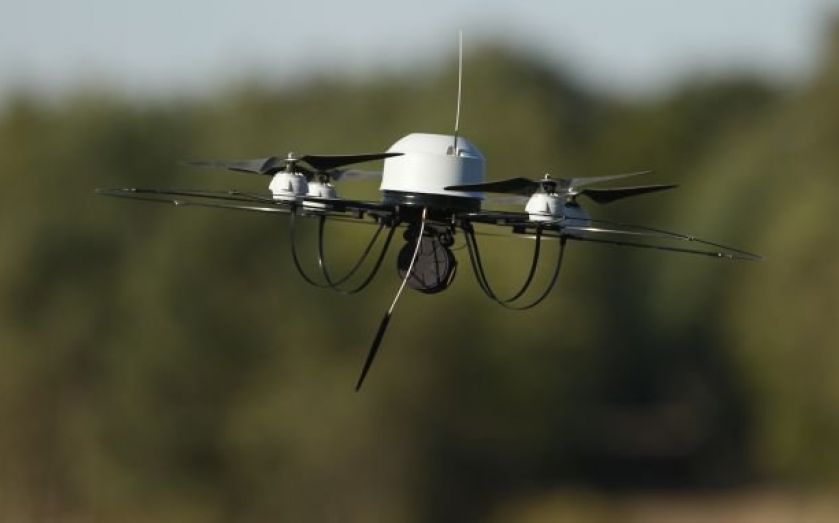 “Thanks, but I must insist!”

“This is getting silly”

It is not out of the question that drones will engage in this sort of amicable conversation in the near future.

Professor Sandor Veres and his colleagues at the University of Sheffield have created a system in which flying robots use cameras to observe each other and then converse politely to coordinate their movements, and in doing so avoid a mid-air collision.

Called quadcopters, the bots have sensors that allow “simultaneous localisation and mapping”, or SLAM, which involves building a 3D map of their environment by overlaying different frames from the camera and selecting key reference points within the scene.

All the information is then fed into autopilot software that allows the robot to navigate safely, but also to learn about the objects nearby and navigate to specific items.

Part of what is special about these robots is their ability to interact and co-operate with each other without overloading communications networks, which will be very useful in emergency situations when a message needs to be conveyed as quickly and clearly as possible.

“The learning process the robots use here is similar to when two people meet in the street and need to get round each other,” explains ACSE research fellow, Dr Jonathan Aitken. “They will simultaneously go to their left or right until they coordinate and avoid collision.”

In the demo they released, Veres and his team tested just two robots, showing how, when starting at the same point, they could coordinate their movements while moving towards a wall. They start at the same altitude and then politely converse with each other to work out how to get around each other and ultimately decide who goes below the other.

The researchers used a computer concept called game theory to programme them, in which each robot is a player in the game and must complete its given task in order to ‘win’ the game.

If the robots play the game repeatedly they start to learn each other’s behaviour, which gives them the ability to use previous experience to estimate the behaviour of the other robot and perform their task successfully.

The system is not just visual: the drones can use radio signals to transmit information to one another. "It's like how a team of human searchers would communicate with each other," says Veres.

Indeed, they hope to develop it further by extending it to a whole team of robots later in the summer, ultimately developing an army of search and rescue robots that can survey an area, prioritise regions to be explored and efficiently coordinate the team by sharing the decision-making.

The robots could play important roles in crisis situations such as search and rescue missions, or operate in environments where it would be dangerous for humans to work.

“As we develop robots for use in space or to send into nuclear environments – places where humans cannot easily go – the goal will be for them to understand their surroundings and make decisions based on that understanding,” says Veres.