Despite 2018's woes, could the year of the pig be a sign of good fortune for Chinese equities? 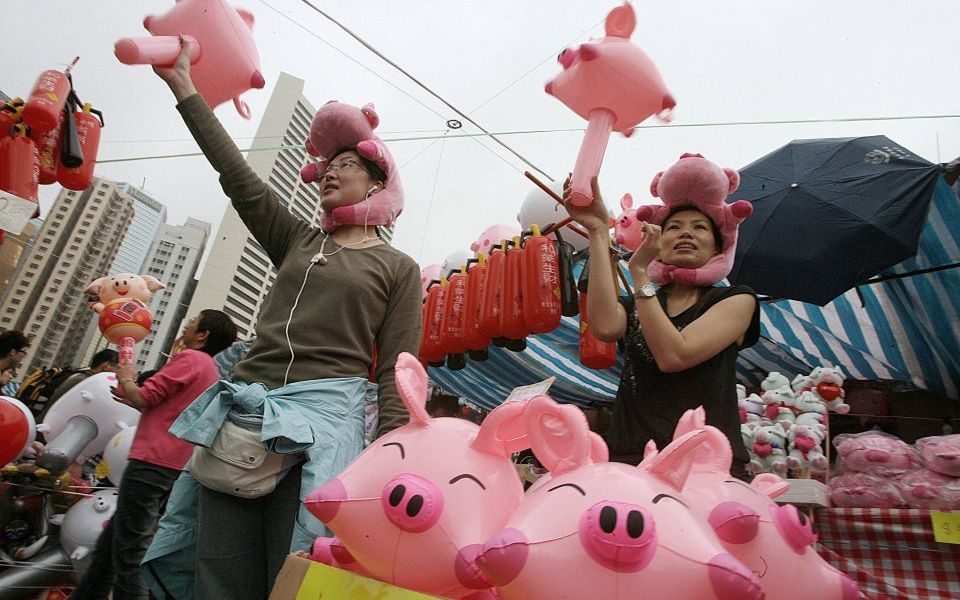 Chinese stock markets were dogged with problems last year – pretty fitting given that it was the year of the dog.

The country grappled with slower growth, a mountain of debt, and a trade war with the US, creating a tough environment for Chinese equities.

The MSCI China index slumped by 14 per cent in sterling terms last year, and the country was the worst performing major stock market of 2018.

But today marks the start of the year of the pig. According to Chinese folklore, the pig is a sign of good luck, so could China’s fortunes change as we usher in the new year?

Let’s start with the problems.

China is still plagued by the same issues, and nothing is going to change overnight. Slowing growth is certainly an ongoing risk that investors should continue to be wary of.

China has directly contributed almost 50 per cent of global economic growth since 2009, according to Jeremy Lang, co-founder of Ardevora Asset Management. “If the world cannot benefit from growth in China, growth becomes very hard,” he says.

Despite the Chinese government taking sensible measures to make sure that the economy slows at a manageable rate (rather than trying to re-accelerate growth), FundCalibre’s research director Juliet Schooling Latter says that the big risk is economic growth slowing at a faster pace than investors are comfortable with.

Bear in mind that, a decade ago, China boasted double-digit growth, reaching levels unlikely to be seen again. GDP growth is expected to sink to 6.5 per cent in 2018, down from 6.9 per cent in 2017.

So relative to itself, it doesn’t look great. However, Eric Moffett from T Rowe Price says that growth still looks solid from a global standpoint.

The country’s growing debt pile is also a massive red flag, with borrowing said to have quadrupled between 2007 and 2014.

And while it’s positive that Chinese authorities are trying to regain control by weaning the country off its credit addiction, this risks further hindering its growth prospects.

“Past recipes for reviving growth, namely turning on the monetary taps or unrestrained public spending, can no longer be so generous because of the steep rise in debt in recent years,” says Fabrizio Quirighetti from SYZ Asset Management.

But with all that said, things are beginning to look up. Quirighetti continues that China has become more measured in its action, resulting in effects that take longer to appear, but which are gradually coming to fruition.

“We believe China should succeed in stabilising growth this year, at least temporarily, because unlike most developed economies, it still has room for manoeuvre.”

As for trade, tensions are still high, but progress is being made with the US. The two countries agreed to a 90-day truce back in December, and there are high hopes that they will reach a deal over the coming month.

According to Jason Hollands from Tilney, an agreement could trigger a re-rating in emerging market stocks, which started to outperform developed markets in recent months.

China is also currently undergoing a major transition, with President Xi Jinping looking to push the country up the value chain of many industries through his “Made in China 2025” programme.

“By shifting China’s industrial capabilities into high-tech areas such as aerospace and robotics – and away from apparel, consumer electronics, and other lower-value products – he hopes to avoid the ‘middle-income trap’ to which so many emerging economies have succumbed,” says Neil Dwane, global strategist at Allianz Global Investors.

And while developing economies have historically struggled with this transition, Chinese consumers have so far proven extremely resilient as they become wealthier.

Indeed, Giles Money from Sarasin and Partners says that companies such as Nike, Diageo, Louis Vuitton, and Kering (which owns luxury brands like Gucci) continue to talk very optimistically about the underlying growth they are seeing.

There’s certainly a sense that China is at a positive turning point as it shifts towards a service-based economy and rebalances its debt levels.

It’s also a good sign that China is opening up to foreign investors through its Stock Connect programme.In terms of investing, Schooling Latter says that those who are less risk-averse may be tempted to drip feed some money in now that markets are cheaper.

Happy year of the pig.