Day in the Life: Ironman world champion Ruth Purbrook on juggling training with a job in the City 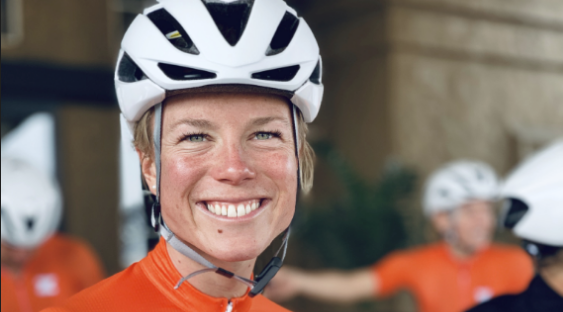 I first got into triathlon in 2013 when I was doing a graduate placement in Lloyds’s charity team.

At the time I was training for the Berlin Marathon and was slightly bored of just running, so I jumped at the opportunity of a charity place in the London Triathlon.

It all spiralled from there. I had been missing the competitive element of hockey, which I played at university, so I signed up to my local triathlon club and began racing Olympic distances.

Six years later and I’m the current world Ironman world champion in the 25-29 age category and I’m looking to win the 30-34 category at Kona, Hawaii, in October.

Swimming 2.4 miles, cycling 112 miles and then running a full marathon requires a lot of training and juggling my job as an executive assistant at Lloyds with sport can be difficult.

To fit it all in you have to be efficient and motivated. Luckily I enjoy both my job and my training. Exercise is a way to de-stress after work and the job is a distraction from the aches and pains.

On a typical work day I get up at 4.45am to ensure I get some training in before starting work at 7am. I will also do a session after work in the evening.

I either cycle to work in the City from Fulham to add miles and swim near work, or use a stationary bike in my garden shed to do an hour of intervals. The idea is to work on my functional threshold power – an effort which in theory you can hold for an hour – to improve my speed and endurance.

In my swimming sessions I work a little bit on technique, but mainly it’s about endurance. I tend to do around 3.5km to 4km, which entails a 1km warm-up then intervals of 200m to 400m, with some 25m to 40m sprints for speed.

My running depends on the season. In the winter I run a lot on the treadmill to improve my aerobic base, whereas at this time of year, which is race reason, I run around my local area to cover greater distances. I usually run for around an hour, but on Sundays I do a longer run which includes some tempo work of 1km to 3km repetitions.

I also previously worked for four months with the Cottage group of runners in Battersea Park, who were much faster than me. I’ve really noticed the difference those sessions made.

Food is important and this year I’ve been working with nutritionist Alan Murchison, author of The Cycling Chef. He’s been brilliant. Time is a major barrier when it comes to eating, so I do a lot of food preparation for the week on Sunday evenings.

I make energy balls to have before early morning sessions and then usually have muesli or porridge as breakfast before going to work.

If I’ve been organised I’ll take a chicken salad and quinoa for lunch, but I do often have to pop out of work to Pret or M&S. Dinner is simple: chicken or fish with vegetables and a kind of grain or potatoes.

There are times when work and the sheer volume of training can become too much, but I know it will all be worth it on the finish line.