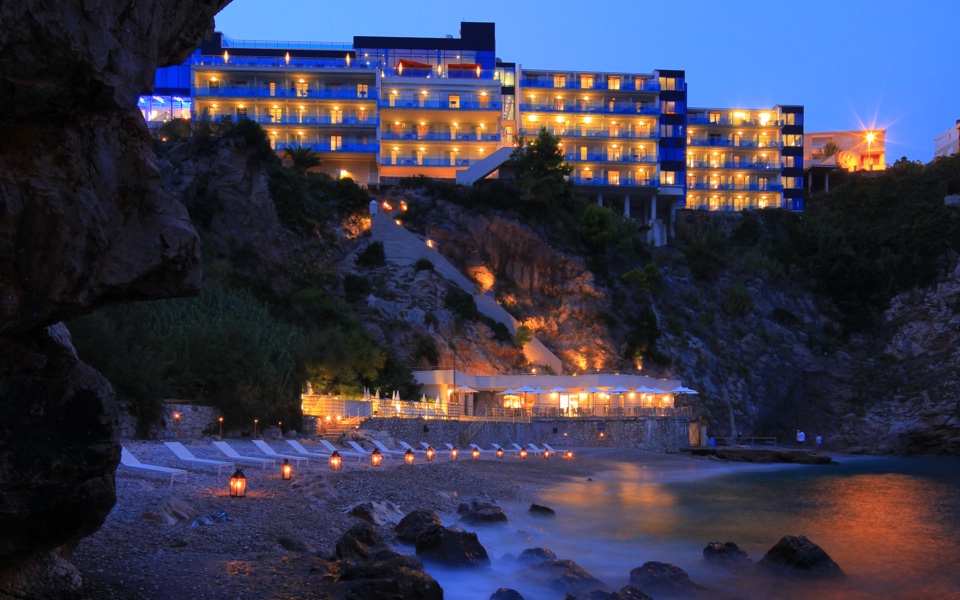 With Croatia among the destinations moved to the Green List today, it is suddenly at the forefront of travel plans for discerning holiday-makers. Here’s how to combine a beach holiday with a city break at the Hotel Bellevue in historical, luxurious Dubrovnik.

WHERE: Over summer especially, the compact Old Town heaves with cruise ship passengers and Game of Thrones devotees, eager to see the city where much of the series was filmed. After sightseeing in the intense heat, it’s bliss to escape the crowds and cool off in the satin-smooth blue waters of the Adriatic. The newly renovated Hotel Bellevue offers the perfect compromise, a 15-minute walk from the Old Town but perched on a cliff above a tranquil cove with a pebbled beach, calm clear sea for swimming and even natural rock platforms for diving.

THE STAY: Jutting out over the water like a cruise liner, the hotel is built to make the most of the spectacular sweeping views over the Adriatic. The sleek wood, soothing suede and soft neutral colours of the rooms allow the vivid blue sea beyond the floor to ceiling glass windows to take worthy centre stage. Breakfasts are outdoor on the terrace overlooking the sea and there’s even a lift to whizz you down through the cliff to the sun-loungers on the beach, making it all too easy to forget you’re minutes away from one of the world’s most beautiful cities.

THE FOOD: Dubrovnik is paradise for seafood lovers. In the Old Town, book a table on the terrace at fine-dining restaurant Posat, where I feasted on octopus carpaccio, monkfish and caramelised figs with a breath-taking view of the Fortress Minčeta and City Walls. But dine in the hotel’s own Vapor restaurant one night as the homemade gnocchi in black truffle sauce and chocolate souffle should not be missed. At the beach, the laid-back Nevera restaurant is steps from the water’s edge and serves delicious seafood spaghetti and roasted lobster. Ask really nicely and they’ll even bring a chocolate souffle down from Vapor for you.

WHAT TO SEE: Get your bearings by strolling the city walls, then explore Dubrovnik’s pretty cobbled streets, maze of alleyways and stone staircases. For a breath-taking bird’s eye view of the Old Town and the Adriatic beyond, ride the cable car to the top of Mount Srd. If time allows, head to Ston, a charming medieval town an hour from Dubrovnik boasting a 5km long defensive wall and the oldest active salt mine in Europe. I sampled fantastic Croatian wine made with indigenous Plavac Mali grapes at the family-run Milos Winery, then visited Mali Ston oyster farm on a traditional fisherman’s boat to dine on fresh oysters and mussels pulled straight from the sea.

AND AFTER THAT: Book a boat trip with the hotel’s concierge round the archipelago of thirteen beautiful Elafiti Islands to explore their unspoilt beaches, shimmering caves and hidden bays. For the ultimate long, lazy lunch, reserve a thatched cabana to enjoy the tasting menu at BOWA restaurant, tucked into an idyllic cove on Sipan Island and only accessible by boat. Sunbathe, snorkel and swim in the translucent Adriatic between courses of tuna sashimi, barbequed grouper fish and fresh fruit served with creamy local cheese and honeycomb. Life really doesn’t get much better.

TOP TIP: Buy some renowned rose face cream, made to a secret recipe at one of the world’s oldest pharmacies within the Old Town’s Monastery.