Could Scottish independence break up the EU? 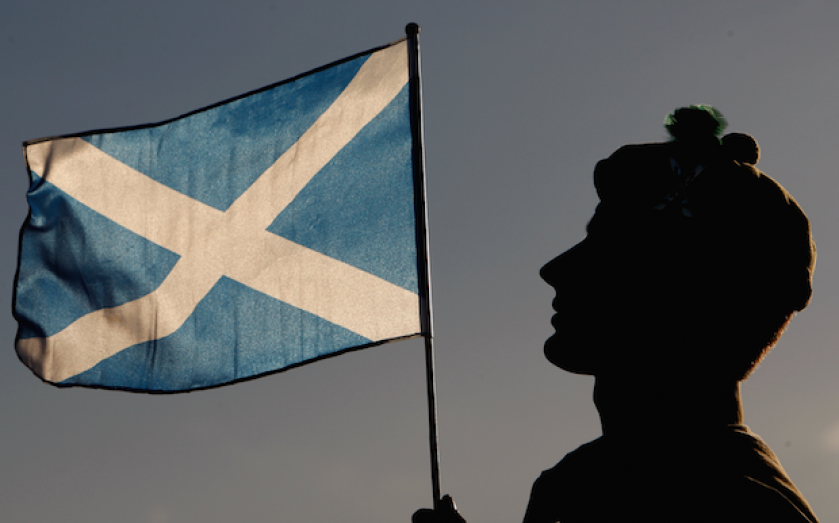 Could Scottish independence lead to the break up of the European Union?
That is one view being put out today by Societe Generale analyst Albert Edwards, who has warned the consequence of a Yes vote could be “as unpredictable and as uncontrollable as those of the late 1980s in Eastern Europe, which led to the ultimate demise of the USSR. The EU has been likened to a shark: if it stops moving, let alone goes backwards, it will die".
His note on the referendum says the “obvious market conclusion is for a weaker sterling” but he prefers to look on the bleaker side, suggesting “a proper old fashioned crisis is plausible”.
Edwards says investors should consider two possible outcomes, beyond that caused by “the truly appalling post-independence current account situation”:

First, the greatly increased likelihood that the remainder of the UK (rUK) will vote to leave the EU against the wishes and expectations of the political elite.
Second… separatist agitation just over the border in Spanish Catalonia is rapidly gathering pace. A belligerent attitude from the Spanish government to a newly independent Scotland rejoining the EU is highly likely in an attempt to quash Catalan hopes of following Scotland's lead.
If the whole UK ends up leaving the EU, could this be the equivalent of the start of a late-1980s Eastern European domino effect that might end equally unpredictably.

All this, Edwards argues, could lead to a pretty tough time for markets, interest rates and the Conservatives themselves, who have committed to a referendum on EU membership.
“Capital will not be moving from north of the Scottish border to the south. It will be moving out of the UK altogether,” Edwards says. “With the rUK needing to attract capital at an unprecedented avaricious rate for this point in the cycle, this ain't going to be pretty.”
We thought we had reached peak fear-mongering, but Edwards, who is known for his generally pessimistic take on the markets, may have pushed it to a whole new level.
Share:
Tags: Scottish independence referendum