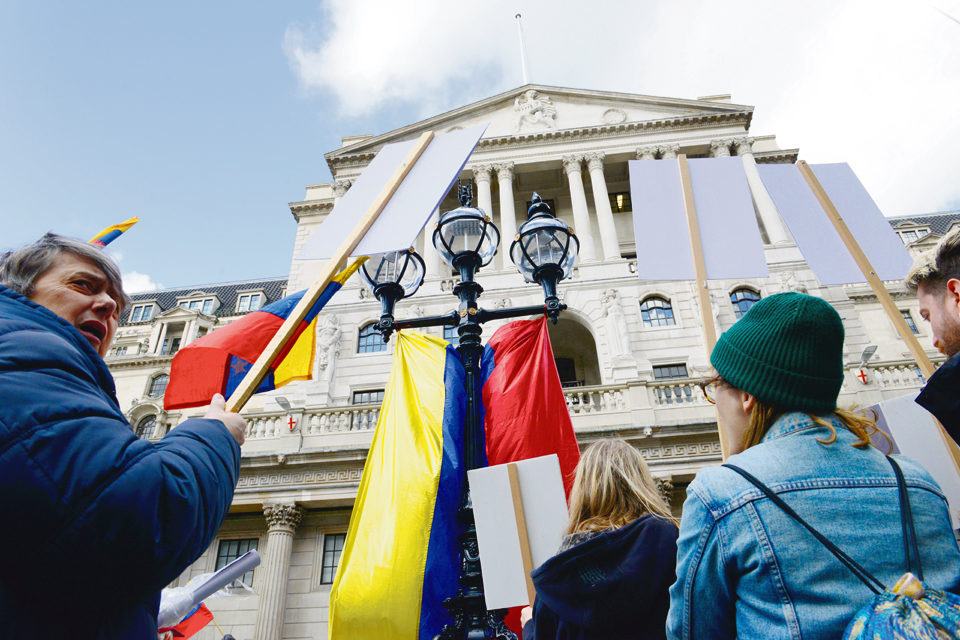 Two of Labour leader Jeremy Corbyn's most prominent allies joined a protest outside the Bank of England today, demanding that it release over £1bn worth of gold to the regime of Venezuela’s socialist strongman Nicolas Maduro.

Members of Maduro's regime have laid claim to the country's gold reserves held at the Bank.

Former Mayor of London Ken Livingstone and Labour MP Chris Williamson said the Bank was guilty of “theft”, after it reportedly refused to transfer gold to a regime accused of widespread vote-rigging, human rights abuses and violence against political opponents.

Speaking alongside him on Threadneedle Street, Williamson – MP for Derby North – added: “I think the Bank is acting, in my opinion, illegally and this amounts to state theft.”

Most European and South American states, alongside the US and Australia, recognise opposition leader Juan Guaido as Venezuela's interim president, after Maduro refused to call fresh elections.

Venezuelans have taken to the streets in recent weeks to protest against Maduro, triggering clashes with National Guard security forces. A number of protesters have been killed, with hundreds detained according to the UN.

Labour leader Corbyn – who Maduro once called a “great friend of Venezuela” – has criticised “outside interference” in the country, prompting criticism from some of his own MPs.

However, arch-Corbyn supporter Williamson said yesterday: “There’s undoubtedly a crisis in Venezuela at the moment, but that’s not going to be helped by seizing the nation’s assets in this way.

“There’s no place for the Bank of England to be intervening in a partisan way.”

Livingstone, who is no longer a member of the Labour party, added: “Maduro is the elected president. He is in control of Venezuela’s resources. It’s outrageous for the Bank of England to be interfering in another country.

“The Bank of England has never been about Britain’s interests. It’s about the international financial sector… You look at the history of Britain since the Second World War even under Labour governments, the Bank of England and the City of London are just broadly involved in making vast profits for themselves.”

Venezuela is understood to hold around £1.2bn worth of gold at the Bank of England. Opposition figures say the Maduro regime sold tonnes of gold last year without the approval of the National Assembly.

Conservative MP Crispin Blunt told City A.M.: “It’s shameful, though not surprising, that these deluded left-wingers are trying to make life easier for the despicable Maduro.”

Maduro, who succeeded Hugo Chavez in 2013, has driven the once oil-rich state to economic ruin, prompting millions of Venezuelans to flee the country amid hyperinflation and food shortages.