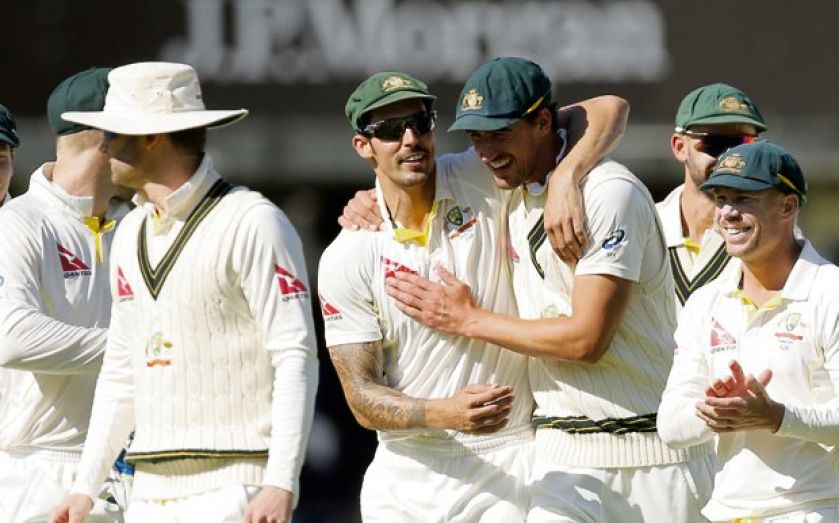 SKIPPER Alastair Cook admitted the axe may fall on England’s misfiring batsmen after his side wilted to a 405-run drubbing on day four of the second Investec Ashes Test at Lord’s yesterday.

Australia declared their second innings on 254-2 shortly before lunch, leaving England with a notional victory target of 509 or 155 overs to bat in order to save the game and preserve their 1-0 series lead.

But in complete contrast to their beleaguered hosts, who managed to cobble together just 10 wickets in the match, Australia’s battery of fast bowlers once again negated a docile surface to rout England for just 103 inside 37 overs.

For the eighth time in 13 Test innings in 2015 England failed to score more than 52 for the loss of three wickets, while their recurring tendency of immediately following victory with defeat extended to a third series.

“Certainly over the last three or four months, too often we’ve found ourselves 30-4 or 40-3, and that’s not ideal in any circumstances or for any team, especially knowing what big runs can do at the top of the order,” said Cook. “We saw how Australia did it in this match and how it sets up the game. It’s hard to expect the middle order to always get you out of trouble. It’s an area of concern and it’s something the selectors might have to look at.

“To get bowled out on that kind of wicket for 100 is not good enough, not acceptable and not up to the standard the guys can play. We had an opportunity here to build on the win in Cardiff and we haven’t taken it.”

The struggles of opener Adam Lyth and under-pressure duo Gary Ballance and Ian Bell, whether it be in this series or longer-term, continued at Lord’s. In total, the trio made just 56 runs in six innings during the second Test.

Despite boasting a healthy average of 47.76 in his Test career so far, Ballance has failed to convince in the No3 slot this summer, while Bell has amassed just 128 runs in his last 12 innings.

Should the England selectors opt for change, in-form Jonny Bairstow of Yorkshire may flicker on their radar after his prolific season, while a re-jig of the batting line-up might be another possibility ahead of next week’s third Test at Edgbaston.

After Australia spent the morning session intensifying an already imposing level of scoreboard pressure, their pacemen quickly set about demolishing England’s limp resistance, while off-spinner Nathan Lyon also chipped in with two wickets, including Stuart Broad for a top score of 25.

The ferocious Australian charge was led by tormentor-in-chief Mitchell Johnson, who finished with 3-27 from 10 fiery overs, as England slumped to 64-7 – a far cry from their all-conquering showing at Cardiff.

England’s woes were epitomised by the calamitous dismissal of all-rounder Ben Stokes, who failed to ground his bat while completing a single, only for his stumps to be dismantled by Johnson’s throw from mid-on.