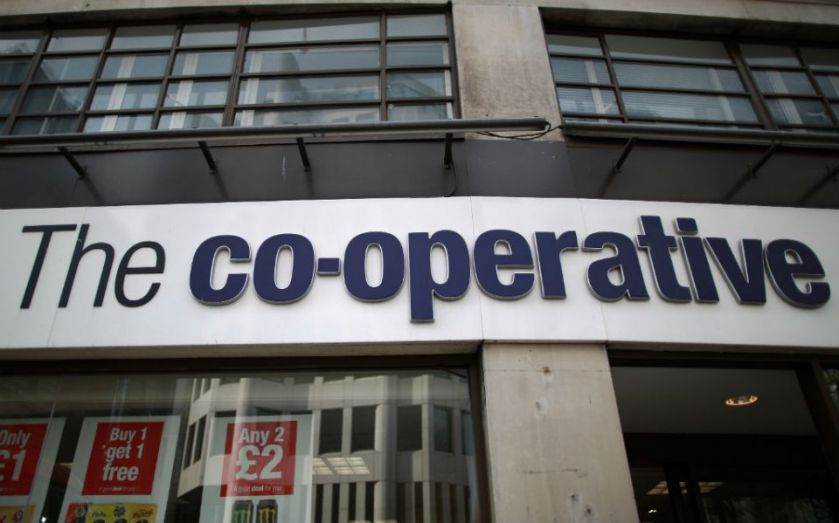 The Co-operative Group has returned to profit – a reversal of fortunes on the previous year's losses of £255m.

Full-year profit before member payments – the equivalent of pre-tax profits for a PLC – came in at £124m in 2014.

Revenues slipped slightly, down three per cent at £9.4bn for the year to 31 March, compared with the previous year's £9.7bn.

A large chunk of the profits related to the disposal of its pharmacy business, which netted the firm £620m, and without that it would "at best, have broken even".

Underlying operating profit, driven by the food and funerals side of the business, was down three per cent to £172m, offsetting losses in its insurance arm.

Convenience stores delivered like-for-like growth of 3.2 per cent, while its overall food business sales inched up 0.4 per cent.

The Co-operative had a huge fall from grace after its banking arm discovered a £1.5bn "black hole" in its finances – not to mention the reputational nightmare caused by Paul Flowers, the Co-op Bank's former chairman.

Finance chief Richard Pennycook was then placed in the top job in September last year, and has since proved the Co-op group can not only be tamed – it can also be turned around.

We significantly reduced net debt, even after meeting our outstanding contributions to the Co-operative Bank. This followed the successful sales of our farms and pharmacy businesses and detailed work to ensure we have the right cost base in place. Our core businesses continued to deliver for customers, with their financial performances reflecting challenging trading conditions across all of our markets and the different stages they are each at in terms of rebuild.

A significant element of our 2014 profit relates to one-off disposal gains on the sale of our farms and pharmacy businesses and property disposals. Without these we would, at best, have broken even. Against that backdrop, and given the need to invest in all our businesses, the board will not be recommending a dividend to members and believes that a resumption of dividend payments is unlikely until the rebuild phase is complete and we have returned to sustainable profitable growth.

A return to profit is a massive milestone in the Co-operative's turnaround. But this is just the first phase of a three-pronged turnaround plan – and there's still a way to go until that's completed in 2017, when it plans to begin dividend payments.