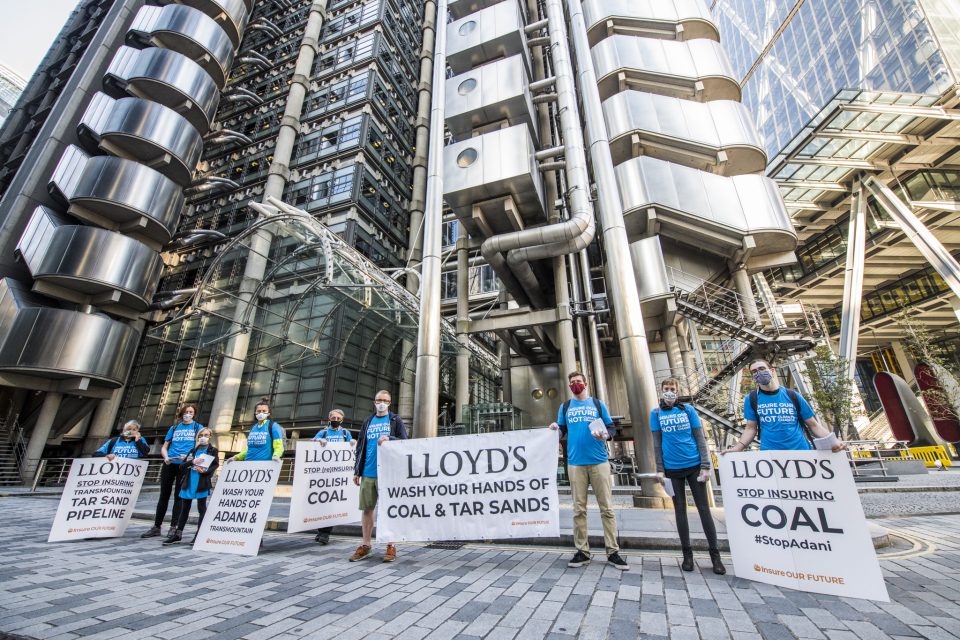 Returning Lloyd’s of London employees have been met with protesters who are demanding the insurer ditch its fossil fuels insurance to protect the climate.

Campaign group Insure Our Future launched its campaign outside Lloyd’s of London office this morning as the insurer reopened its underwriting hall.

Protesters are criticising Lloyd’s for failing to take “meaningful action” on climate change and undermining the positive moves made by other insurers.

Since 2017, 19 global insurers have restricted insurance for investments in coal and tar sands.

Lloyd’s has instead stepped in to cover these controversial projects, which include the proposed Adani Carmichael coal mine in Australia and reinsurance for Polish coal mines.

Campaigners are calling on Lloyd’s to “wash its hands of coal and tar sands” as it highlights that coal remains the biggest single source of carbon emissions.

In April 2018, the insurer committed to divest from and screen out investments in companies heavily associated with coal. However, the Insure Our Future campaign claims this only covers around £2bn of the assets held by Lloyd’s market.

Campaigners are calling on Lloyd’s and its members to stop insurer new coal and tar sand projects and companies, as well as new oil and gas expansion projects.

“Lloyd’s has both a moral imperative and a long-term self interest to act as society’s risk manager and stop being a stain on the European insurance industry.”

The protests come ahead of further protests by Extinction Rebellion this week. The climate change activist group are planning to block roads around parliament today as they call on MPs to back a climate emergency bill.

A spokesperson for Lloyd’s said: “At Lloyd’s, we take climate change extremely seriously and recognise the important role insurance is playing in supporting, accelerating and de-risking the transition to a low carbon economy.”

“Whilst the Lloyd’s Corporation does not set underwriting policy in the market, unless there is a specific legal or regulatory requirement to do so, we are nevertheless committed to building consensus across the 90-plus syndicates that operate at Lloyd’s to drive this transition.”