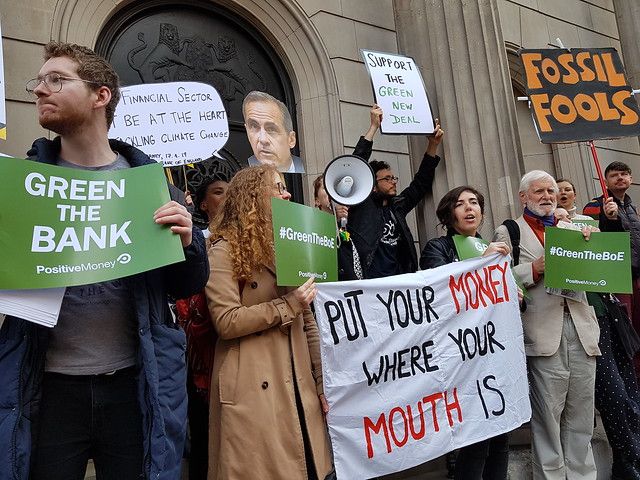 Climate activists protested outside the Bank of England this morning calling for the institution to go green, ahead of the release of its inflation report this afternoon.

The groups also demanded that the bank guides firms to stop investing in fossil fuels, arguing that it is “complicit in the climate crisis”.

The protest comes after weeks of disruption in London caused by eco-activist group Extinction Rebellion, which called on financial institutions to “tell the truth” about its role in the “climate and ecological emergency”.

More than 300 Extinction Rebellion protesters blockaded the London Stock Exchange, Goldman Sachs and Bank Interchange and other areas in the City last week, in a day of action that brought two weeks of protests to an end.

Positive Money executive director Fran Boait said: “As regulator of financial system, the central bank has the power to stamp out risky fossil fuel lending, using the same macroprudential tools it has used to clamp down on irresponsible mortgage lending since the financial crisis.

“In choosing not to use these powers at its disposal, it is complicit in the climate crisis.”

Writing in the Guardian, Carney said firms must integrate the monitoring of climate-related financial risks into day-to-day supervisory work, and sustainability should be central to portfolio management.

“The stakes are undoubtedly high, but the commitment of all actors in the financial system to act on these recommendations will help avoid a climate-driven “Minsky moment” – the term we use to refer to a sudden collapse in asset prices,” he said.