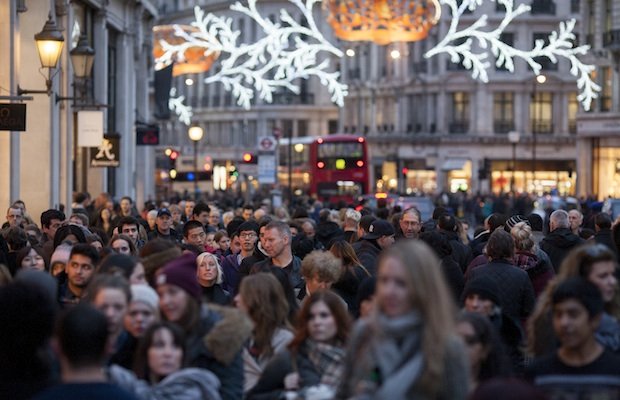 Retail sales picked up significant pace in the first half of December, as shoppers took a pre-Christmas breather in October and November before the festive rush.

The Confederation of British Industry's Distributive Trades Survey came in at 34, rocketing past November's figure of one, the consensus forecast of 10, and matching September's 15-month high.

Orders placed with suppliers increased particularly markedly, up to 25 from one – the highest in more than a year. Retailers said they expected further strong sales in January, too.

"After a disappointing couple of months, sales volumes in December recovered their sparkle, beating retailers' expectations," said Barry Williams, chair of the CBI survey panel and senior executive at Asda.

"Customers have clearly held off spending through the autumn and we're only now seeing them start to hit the stores," he added.

Purchasing power has been limited by inflation running above earnings growth for a prolonged period, so people have probably been controlling their spending, says IHS Global Insight's Howard Archer. It looks like a fair number of people have left their Christmas shopping until late, hoping for a bargain.

The survey lifts hopes of a good Christmas for retailers, says Archer, although he emphasises that a significant number of retailers have been heavily discounting in the run up to Christmas because of the sluggish sales in October and November.

And when it comes to the new year, Archer questions how robust spending will be, taking into account that inflation is currently still running at double the rate of earnings growth:

Given the squeeze on purchasing power, it does seem highly likely that consumers will be very keen to take advantage of genuine bargains in the clearance sales, but they may well retrench for a while thereafter – particularly if they did end up splashing out for Christmas.