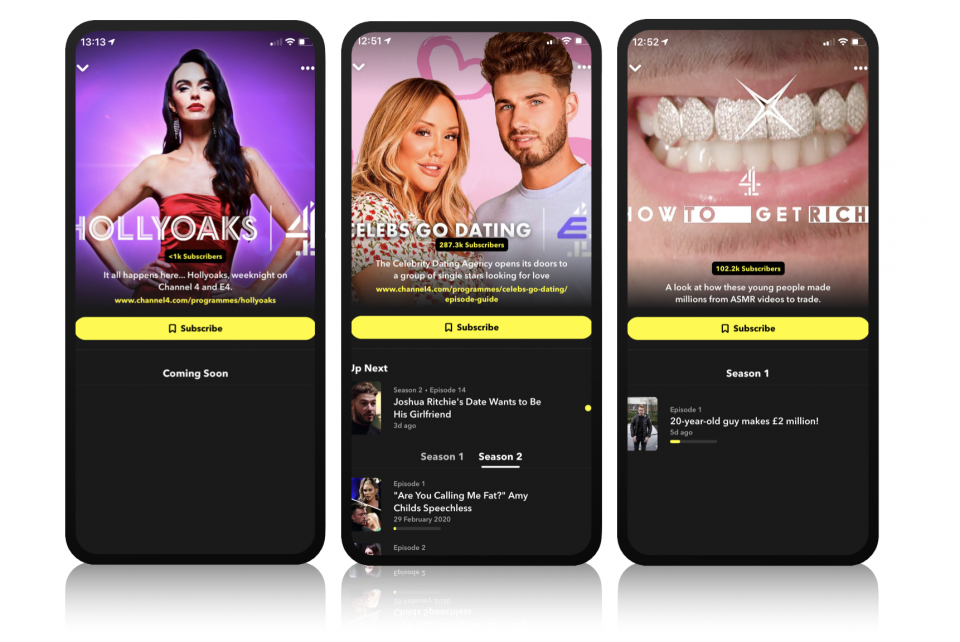 Channel 4 today said it will air Hollyoaks on Snapchat as part of a fresh deal to bring more than 300 episodes of its TV programmes to the social media app over the next year.

From today the broadcaster will show short-form edits of the soap opera favourite on Snapchat’s Discover section.

The Undateables, The Last Leg, Five Guys A Week and Grime Gran are also included in the package, while further shows from Channel 4’s slate of programming are set to follow.

The new deal builds on a content partnership between the two firms signed in 2018. Since then seven shows have launched on Snapchat, including First Dates, Celebs Go Dating and Don’t Tell The Bride.

The tie-up marks the public service broadcaster’s efforts to tap into the highly sought-after youth audience amid a decline in traditional TV viewing among young Brits.

“We have a unique brand and taste and reach into the youth-dominated audience of Snap so the fit is clear,” said Channel 4 chief executive Alex Mahon.

“This partnership allows us to further our mission to serve young audiences, to increase time spent with Channel 4 and to supercharge our digital footprint across 2020. We are continually evolving and adapting to reach our audience wherever they are and this is the latest iteration.”

Sales rights to the shows will be shared between Snapchat and Channel 4’s commercial arm 4 Sales.

Snapchat will also roll out an augmented reality lens allowing users to create their own cliff-hanger ending to Hollyoaks episodes.

“We are delighted to extend our successful relationship and bring even more great shows to UK Snapchatters. We can’t wait to see their distinctive storytelling style reimagined for the vertical screen.”