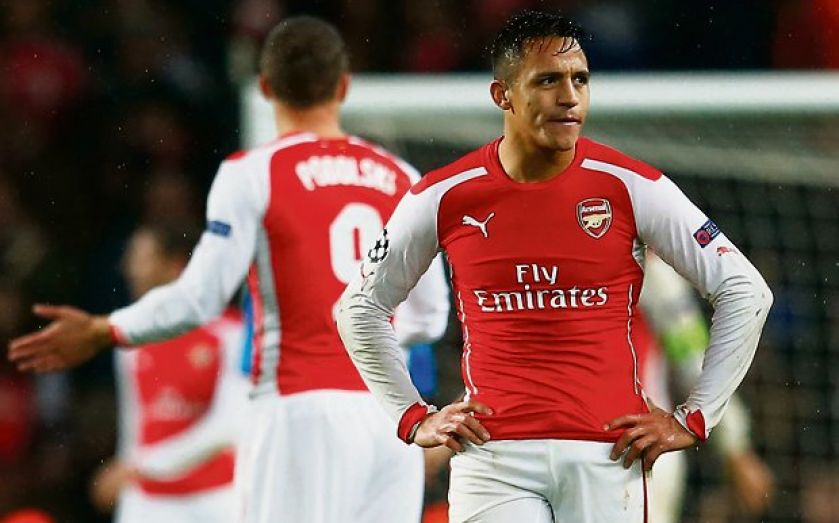 FUMING Arsenal manager Arsene Wenger lambasted his side’s complacency last night after they blew a chance to cement a place in the Champions League knockout stage by surrendering a three-goal lead in the final half-hour.

The Gunners looked to be cruising into the last 16 for the 15th successive season when goals from captain Mikel Arteta, Alexis Sanchez and Alex Oxlade-Chamberlain inside 58 minutes left Anderlecht reeling. But Anthony Vanden Borre’s brace put slapdash Arsenal on the ropes and Alexander Mitrovic completed the unlikely comeback in the last minute.

Wenger’s men need just one point from their last two Group D games to progress, but defeat at home to Borussia Dortmund next time could leave them needing a result on a nervy final night at Galatasaray.

“We had a poor defensive performance from the first to last minute today,” said Wenger. “At 3-0 we thought the job was done, and it was combination of switching off and fatigue. They finished stronger and sharper and we got punished. It’s very disappointing.

“Maybe we underestimated subconsciously Anderlecht. In the Champions League you need to be at the mental level or you get punished. Sanchez was one of the few who was at his level. Across the pitch we were very, very poor tonight.”

Dortmund’s 4-1 in over Galatasaray ensured their qualification and they look certain to win the group, meaning Arsenal would face the sort of unfavourable draw that has ended their hopes at the first knockout hurdle four years in a row.

Having needed two last-ditch goals to win in Brussels last month, the Gunners looked determined to put this to bed early and took the lead in the 25th minute through Arteta’s dinked penalty after Chancel Mbemba had hauled down Danny Welbeck.

Four minutes later Alexis made it two — the Chile forward brilliantly lashing home a first-time volley, after his free-kick rebounded off the wall, for his fifth goal in three games — and Oxlade-Chamberlain sidefooted a breakaway third just before the hour.

But the cracks appeared seconds later, when Vanden Borre took advantage of a lax offside call to tuck a low cross past Wojciech Szczesny from close range, and panic set in 18 minutes from time when Nacho Monreal was judged to have hauled down substitute Mitrovic.

Vanden Borre sent Szczesny the wrong way from the spot to stoke Anderlecht’s comeback hopes and in the 90th minute Mitrovic got in front of Per Mertesacker to meet Andy Rajar’s cross with a diving header.