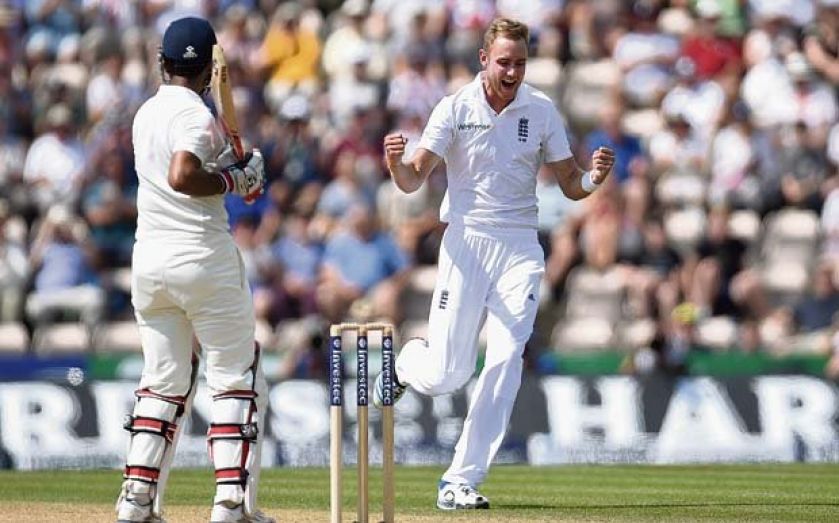 SEAMER Stuart Broad admits that England are unlikely to enforce the follow-on today despite it remaining a viable option after seven Indian wickets fell on day three of the third Test in Southampton.

The tourists reached 323-8 at the close yesterday, 246 behind England’s first innings total of 569-7 declared and still 47 runs short of their target to avoid being asked to bat again.

Broad was the pick of the bowlers with three wickets, as James Anderson claimed two to add to his dismissal of Shikhar Dhawan on Monday evening and Moeen Ali also picked up a couple of scalps.

The follow-on remains a possibility for England with time a potential factor in the outcome of the match, although Broad is not convinced skipper Alastair Cook has the tools at his disposal to use it appropriately.

“I’m not a fan of the follow-on,” said Broad. “Even if you have a 20 to 30-over rest it gives the whole fielding unit and the bowlers just another oomph to go again.

“I wouldn’t imagine we’d be looking to enforce the follow-on. I think unless you’ve got a world-class spinner who can bowl one end for the second innings, the follow-on is risky.”

Ajinkya Rahane top-scored for India with 54 before being dismissed by Moeen, who was warned by the International Cricket Council to stop wearing Pro-Gaza wristbands.

India captain Mahendra Singh Dhoni remains at the crease with an unbeaten half-century and while Broad was pleased with England’s work on day three, he believes it is vital that they finish their opponents off early this morning.

“We were pretty happy with eight wickets although we’d have loved to have bowled them out,” added Broad.

“It’s crucial to finish India off in the first half-hour, 45 minutes because a player like Dhoni can be very dangerous for us.”