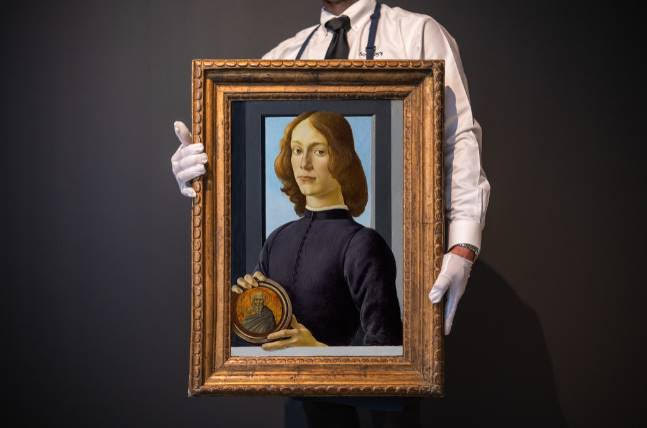 One of the last known privately-owned portraits by Renaissance artist Sandro Botticelli is expected to fetch at least $80m (£63m) when it goes under the hammer in January.

The 550-year-old painting, titled Young Man Holding a Roundel, will go up for sale as part of Sotheby’s Masters Week series of auctions in New York next year.

Bought for just £810,000 by its current owner in 1982, its whopping $80m price tag makes it the most expensive auction estimate for an Old Master painting in history.

The portrait, which depicts an unidentified young man holding a small circular roundel depicting a saint.

Although the sitter’s identity has never been verified, he is presumed to be a member of the wealthy Medici family, who were important patrons of Botticelli and the wider Florentine art community in the 15th century.

The portrait was first recorded as being part of the collection of Lord Newborough at Caernarvon in Wales in the 1930s, and is believed to have been acquired by his ancestor to Sir Thomas Wynn while living in Tuscany.

It was passed to private collectors in London in the mid-1930s, before being sold at auction to its current owners 50 years later.

Botticelli’s other paintings, including the Birth of Venus and Primavera — both in Florence’s Uffizi Gallery — are considered some of the most famous works in Western Art.

“In the popular imagination, no other painter evokes the golden age of the Florentine Renaissance more powerfully than Sandro Botticell,” said Christopher Apostle, head of Sotheby’s Old Master Paintings Department in New York.

“Young Man Holding a Roundel [is] a painting that encapsulates the intellectual, courtly and humanistic virtues that define the Italian Renaissance.”