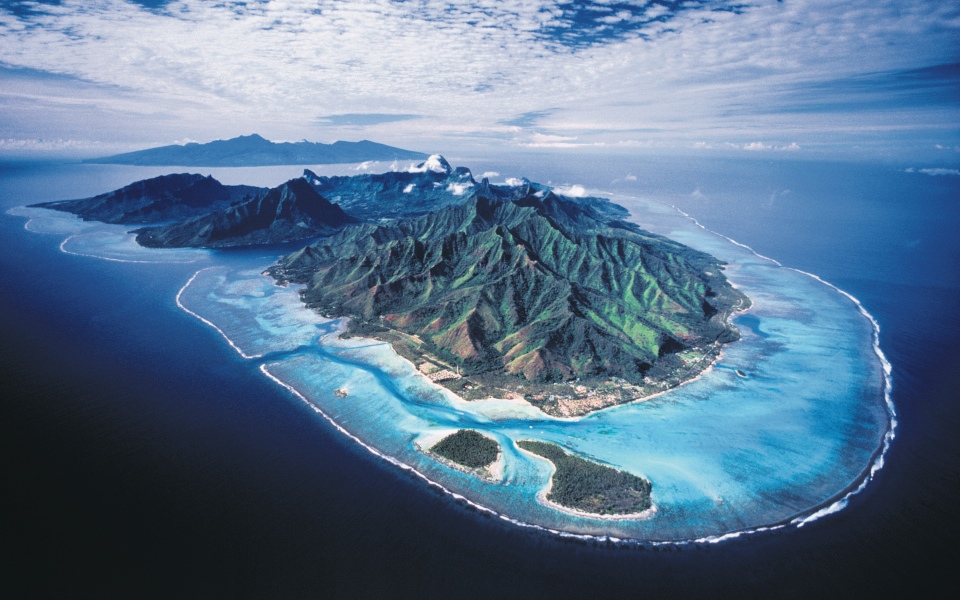 French Polynesia is the archetypal island paradise. A place of such astounding natural beauty that superlatives fail from overuse. This French overseas territory sits in the heart of the South Pacific, at the centre of the Polynesian-triangle; roughly equidistant between Hawaii, Easter Island, and New Zealand.

It consists of five culturally and geographically diverse island groups, spread out over an area the size of Western Europe. Bora Bora’s reputation as an essential destination for luxury resorts is well-deserved, but visitors should consider casting their net wider. I visited three islands; Rangiroa, Moorea, and Tahiti.

Rangiroa is the perfect getaway for beaches and marine life. Part of the Tuamotu Archipelago, it is one of the world’s largest atolls; a ring of coral islets surrounding an 80-kilometre-long lagoon. Far out in the ocean, about an hour’s flight north-east of Tahiti, its very remoteness makes it easy for visitors to tune out the rest of the world and lose themselves in a tropical idyll of white sands and turquoise seas.

The Kia Ora Resort and Spa offers a range of accommodations, with bungalows modelled on traditional Polynesian designs available over-water, beside the beach, or walled with a private courtyard and pool. There is jetty with a bar, where you can sip island cocktails and look at fish through windows in the floor. There is also a buffet restaurant, with cultural shows featuring performers from the local community.

A boat tour of the lagoon is an excellent day trip, traversing its full length to a clutch of coconut palm-covered islands, situated in shallows that teem with harmless, foot-long blacktip reef sharks. While you sunbathe, swim, or explore nearby islands and coral outcrops, the crew from Oviri Excursions will prepare a lunch of fruits, salad, grilled fish and chicken. The islands’ French culinary heritage is evinced by the presence of baguettes and brie, and openly mocked with a plastic lump of Chesdale, New Zealand’s leading brand of processed cheese. 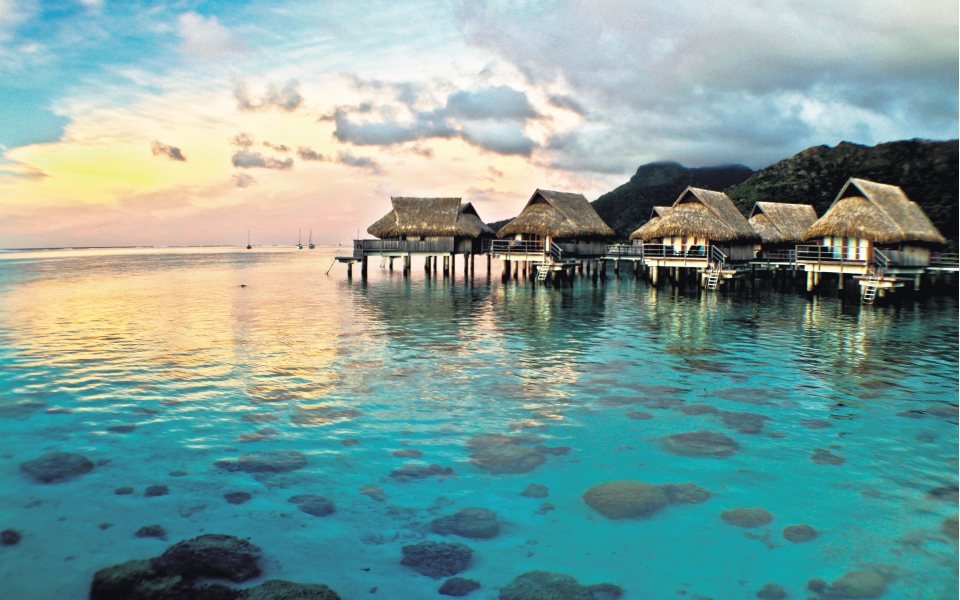 On the return trip there is an opportunity to swim with sharks. Most are blacktip reef sharks, the largest about two-foot in length, but as the crew chums the waters lemon sharks appear. Up to three metres long, and looking like the villains from every knock-off Jaws flick, they certainly heighten the sense of fear and excitement. There is no record of a lemon shark killing a human, but without the protection of a cage or chainmail, the prospect of an attack gnaws at you in exactly the way that their teeth do not. Before returning to the resort there is a chance to wind down with a little drift snorkelling in fast moving waters so deep and clear that it almost feels like flying.

You can hire a futuristic two-seater electric car to explore the atoll, visiting Gauguin’s Pearl Farm to witness the production of French Polynesia’s famous black pearls, or Relais Joséphine, a guest house and restaurant that overlooks a major pass, where water flows in and out of the lagoon, and bottle-nosed dolphins gambol in the surf.

Manava Beach Resort and Spa is the perfect place to unwind. It has everything you would expect of a luxury tropical resort, and a coral nursery, to ensure that the reef remains healthy for future generations.

Moorea is a land of primordial magnificence; a lost world of lush green forests and rich red earth, with a core of improbable parabolic mountains. You fully expect to see dinosaurs or King Kong crashing through the trees, but the reality of the wildlife – small lizards, land crabs, and wild chickens – does nothing to diminish the awe-inspiring landscape. Its toothy silhouette is visible from the Tahitian mainland, which is just 40 minutes away using the comfortable passenger ferry.

Tourists have certain expectations of a trip to French Polynesia, so there is a certain sameness to the layout of the higher end hotels. On Moorea there was an infinity pool, and bungalows over-water, or inland with a private pool, but having said that, the Manava Beach Resort and Spa is the perfect place to unwind. It has everything you would expect of a luxury tropical resort, and a coral nursery, to ensure that the reef remains healthy for future generations.

Riding on a quad-bike, with ATV Moorea Tours, is a fun way to explore inland; fording streams and snaking up hillsides to more breathtaking views. 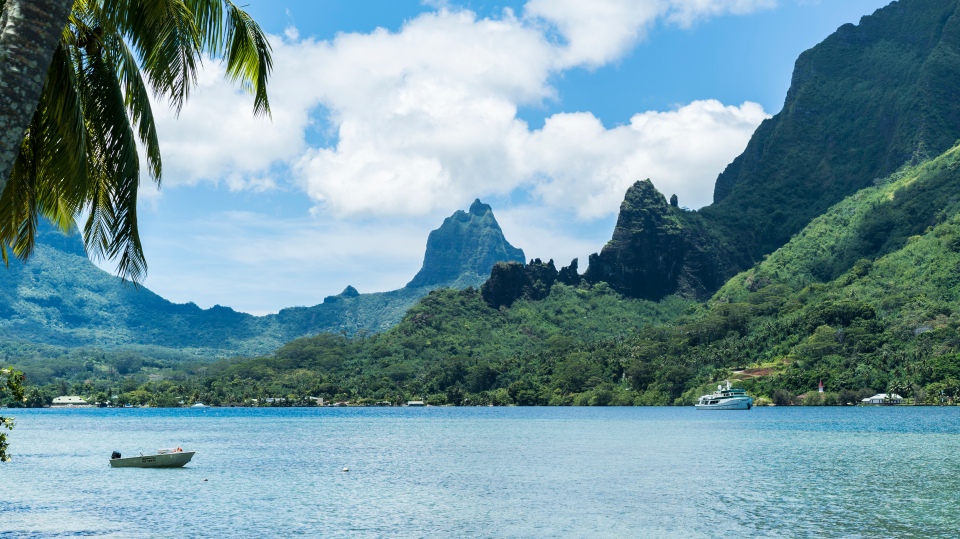 But for a truly eye-opening experience join Sam and his wife Sylvie, whose Moorea Maori Tours lets guests participate in a range of Polynesian cultural activities, including gardening in a traditional plantation, paddling outrigger canoes, and net-fishing on a reef, and then enjoy a meal made with the bounty of land and sea. Sam – who is extensively inked – also works in his brother-in-law’s tattoo studio, so anyone wanting a permanent souvenir should consider making a booking.

Tahiti is the largest island in French Polynesia; the location of its international airport and capital. A major urban centre, Papeete’s markets allow visitors to get a taste of local life. The covered municipal market is one of the oldest tourist attractions, packing in vendors selling all kinds of t-shirts, jewellery, postcards, ornaments, exotic fruits, fresh fish, monoï oil, fabrics, handicrafts, sea shells, and street foods. After dark there is a night market on the waterfront, where food trucks feed locals and tourists alike.

If you were anywhere else, seeing dozens of dolphins would be the highlight of the trip, but after a few days in Tahiti I had become almost inured to the majesty of nature; I wanted them to get out of the way so that I could see a damn whale.

Teuai, from Iaorana Tahiti Expéditions, will take you on a 4×4 tour through the Tahitian interior; along the Papeno’o Valley, through steaming rainforest and craggy peaks, up to a tunnel which passes through the mountain at the centre of the island. Teuai is a renaissance man – a polyglot, athlete, and dancer – whose knowledge of, and passion for, the traditions of French Polynesia is inspirational.

If you were anywhere else, seeing dozens of dolphins would be the highlight of the trip, but after a few days in Tahiti I had become almost inured to the majesty of nature; I wanted them to get out of the way so that I could see a damn whale. Every spring, humpback whales come to Tahitian waters, to mate and give birth before returning to the Antarctic. Operating out of Papeete, TopDive offers visitors the chance to snorkel with these majestic leviathans, seeking them out in covered boats, crewed with experienced diving instructors to ensure the safety of everyone; people, whales and whale calves. While swimming with sharks is exhilarating, swimming with humpbacks is transformative. It’s impossible not to read intelligence into their large, blinking eyes.

Nothing demonstrates the vivid hyperreality of a visit to French Polynesia quite so powerfully as returning home however. It’s like Dorothy’s transition from the technicolour spectacle of Oz, to the dull, sepia-toned banality of Kansas (especially if you fly back into Southend). And while you can find comfort in the familiar, your thoughts will drift back to the fantasy, again and again and again.

Air Tahiti Nui is the national carrier to French Polynesia with departures from Paris, Los Angeles, Tokyo and Auckland to Tahiti with connecting flights available from London. An economy class return fare with Air Tahiti Nui from Paris to Papeete, via LAX starts from 1,430 GBP including taxes. For further information and reservations contact: +44(0) 844 482 1675, email resa@airtahitinui.co.uk or visit airtahitinui.com/uk-en​