Imports of as a share of US GDP have been falling since 2011, but renewed momentum across the Atlantic could still buoy global growth, according to a new BoAML Global Research report.

BoAML's Emanuella Enenajor believes that imports have been rising at a slower pace than GDP for two reasons.

(1) Energy imports have declined as the US substitutes towards growing domestic production, and (2) Import prices have been weak. Enenajor points towards global disinflationary pressure as weighing upon the price of goods the US has been purchasing from abroad.

When these two factors are controlled for, the trend in real non-petroleum imports to real GDP "is roughly on the same track as in pre-crisis times", signalling that the responsiveness of import growth to GDP growth stands.

Winners from rising US import demand for factory-produced goods will be seen across developing and developed markets. "Proximity matters", says BoAML, with Mexico and Canada standing out as most likely to benefit from an upturn in US demand. 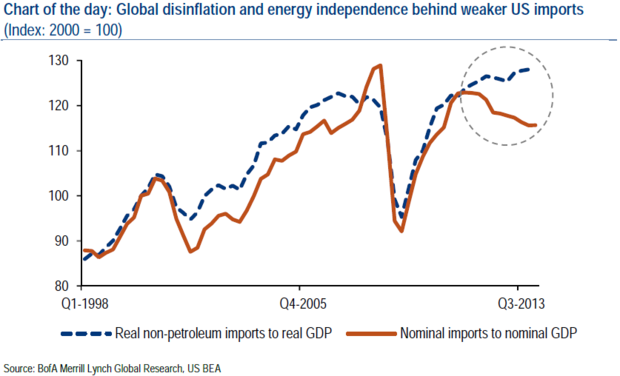