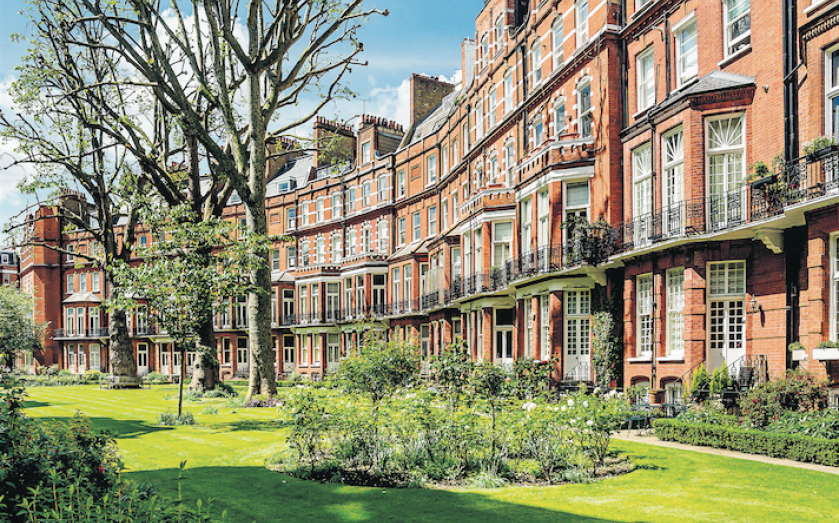 Next weekend, over 200 gates will be unlocked, grass will be mown, shrubs will be spruced and marquees will be erected to allow thousands of people to walk around London’s historic garden squares. The annual Open Garden Squares Weekend will kick off on 14 and 15 June to showcase the beauty and grandeur of these gardens surrounded by the houses of the rich and famous.  But what is a garden square and what part does their existence play in London’s residential history? Traditionally, it’s a spot of greenery surrounded on four sides by a square or a rectangle of roads lined with buildings. The gardens themselves don’t have to be square; it’s quite common for them to be oval, as seen in Grosvenor Square, circular as in Bedford Square, and even pentagonal like the one in Charterhouse Square. The homes surrounding these gardens are often period terraces emulating country homes with their continuous palatial facades.  Over the centuries, these were adapted to suit the needs of changing communities, but a resident’s key to one of these enclosed gardens is still seen as a sign of a sought-after address, and the privacy of their iron railings hide the secrets of prime ministers, Russian oligarchs and literary greats.  Gems on offer at the Open Garden Squares Weekend include; 10 Downing Street where the coalition government was announced to the press in 2010 and the Obamas enjoyed a barbecue with the Camerons during a state visit in 2011; Highbury Stadium Square, a new minimalist, art deco-style garden in the middle of the former Arsenal stadium; and Carlton House Terrace Gardens, built by Regency architect John Nash for “persons of the highest social rank” and  still home to some of the world’s wealthiest people.  Mary Beeton, sales director at Hamptons International, which is sponsoring the event, argues that the capital’s garden squares tell us far more about London’s past and people than Big Ben, the Houses of Parliament or any other imposing icon along the skyline. “It is garden squares that set London apart from the rest of the world,” Beeton argues. “Countries across the globe may have their trophy towers and status symbols, but they were built for prestige and power, not people. “They were designed for its residents to live in. Since the Georgian era, garden squares became the first London suburbs, with each estate planned as a self-contained community with a square of grand houses and green space at its heart, a church, and a market place, surrounded by a series of increasingly expensive streets.” Buyers are also willing to pay over the odds to live in a garden square, according to the estate agent’s research team. A recent report analysed house prices around 64 garden squares and the price premium for a property on one in central London is 25 per cent higher than elsewhere in the local area. On average, a home within one will cost £5.5m compared to just over £3m for a property just 200 metres away.  Johnny Morris, head of research at Hamptons International, said, “The price premium is a reflection of the scarcity of housing stock available, matched with a prime central London location which lends to the notion that purchasing a property on a garden square is at the very pinnacle in the hierarchy of residential addresses.” The most expensive garden square in the capital is Wilton Crescent in Belgravia where the average house goes for approximately £14.8m. The next most expensive is Chester Square also in Belgravia (in fact, the Royal Borough of Kensington and Chelsea dominates the top ten), which was once home to Lady Thatcher. Her house sold for £12m in January, which is actually below the average asking price of £14m. The price of a home on a London garden square has just as much to do with heritage and tradition than it has to do with the location’s centrality or occupants.   “A home on a traditional London square will attract interest from all corners of the globe, for one is buying a treasured and coveted property of the past,” Beeton adds. “Indeed, the legacy of the early garden square is apparent in developments across the capital, each creating new communities centred around smart landscaped gardens. This nod to nostalgia reaffirms a sense of Britishness and grandeur that lives on within the capital’s house builders.”

Book tickets and find out more about the Open Garden Squares Weekend by visiting opensquares.org