Novak Djokovic is the man to beat at this year's ATP World Tour Finals.

The world No1 has enjoyed his trips to the O2 Arena for the tennis season's curtain call event, boasting an 81 per cent win rate that betters all seven of his competitors' records at the venue.

Djokovic is currently on a 15 match winning streak at the tournament, having won the title for three years on the bounce.

Since it moved to London in 2009, only Djokovic, Roger Federer and Nikolay Davydenko – on its debut year – have won the World Tour Finals.

After Djokovic, Federer has the next best record of this year's eight finalists with a 76 per cent win rate and two titles to his name.

And the Swiss has more ATP World Tour wins in London than anyone else, with 22 and to Djokovic's 21. 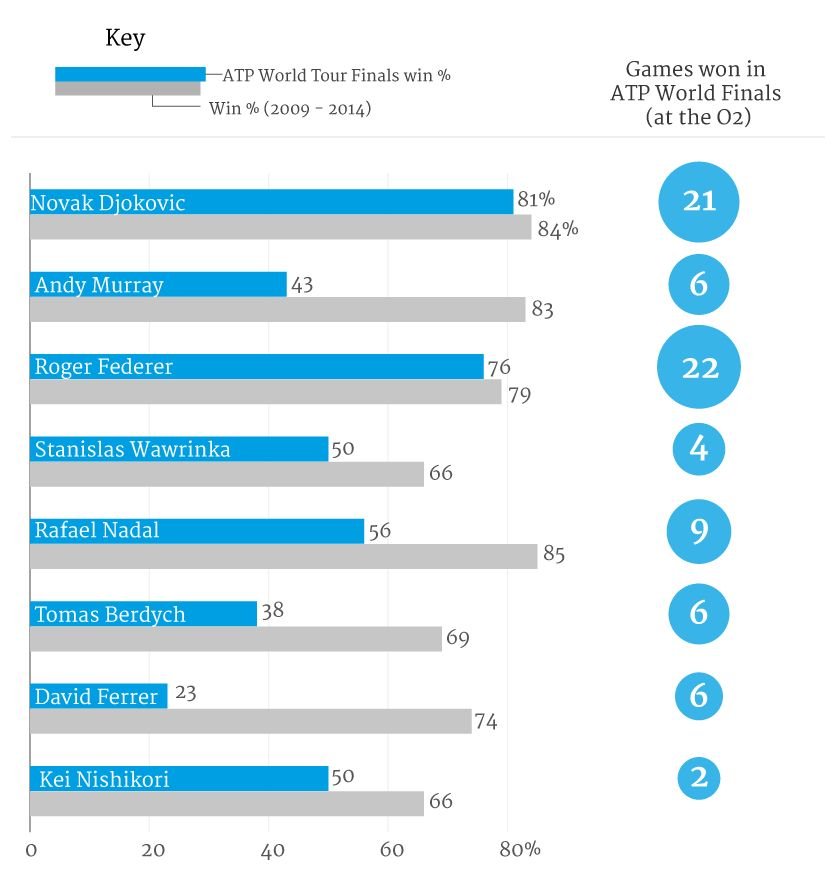 In contrast, Andy Murray has often struggled at the O2 Arena with just six wins from 14 matches, giving him a 43 per cent win rate at the tournament which pales in comparison to an overall win rate of 83 per cent in matches from 2009 to 2014.

Murray has enjoyed a successful season so far this year, having won more matches than ever before, yet his attention may be more directed on the forthcoming Davis Cup final – Britain's first since 1978 – which starts on November 27.

The Davis Cup will be held on a clay-court in Ghent and Murray has been practising on the surface this week rather than on the hard court surfaces used at the O2 Arena.

Rafael Nadal, who has not won the event in London nor anywhere else, has a 56 per cent win record at the O2.

The only player who comes close to the record boasted by Djokovic and Federer in London is Davydenko who triumphed in 2009 and never qualified again.

In fact, in the last 12 years Davydenko and David Nalbandian are the only other winners of the event at its previous home in Houston and then Shanghai.

Should Djokovic win a fourth World Tour Finals in succession, he will be the first since Ivan Lendl in 1987 and only second player ever to do so.