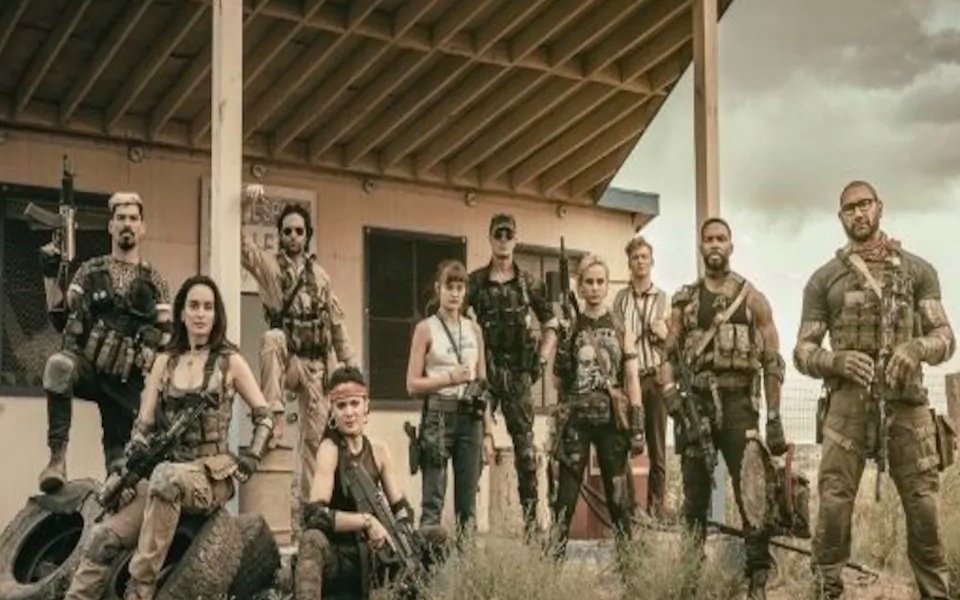 This is the year Zack Snyder took care of unfinished business. After reviving interest in the DC Universe with The Snyder Cut on HBO Max, he has jumped over to another streaming service for a project that has been in the works since 2007. Army Of The Dead is one of those projects that always seemed to just be on the verse of happening, but it wasn’t until Netflix snapped up the rights that his zombie heist concept could stagger to life. So, is it worth it?

Dave Bautista has been a reliable supporting player in the Marvel Universe and in films including Blade Runner 2049, but he takes the lead here. He plays Scott Ward, a man living a quiet life as a burger chef after fighting his way out of Las Vegas, which has fallen to a zombie outbreak and been quarantined from the rest of society.

With days before the city is blown up by a nuke, he’s approach by a shadowy casino owner (Hiroyuki Sanada) with a proposition. He wants Scott and a team of mercenaries to break into Vegas, and take $200m of unclaimed money from a casino vault. Calling on friends old and new, Scott has to put a painful past behind him to try and survive a nightmarish task, which includes a new breed of evolved zombie (“faster, intelligent, straight out of your fucking nightmares”).

It’s a simple, fun premise to tuck into. A little bit Armageddon, a little bit Zombieland, and a lot of Zack Snyder. As is his custom, there’s slow motion and effects galore from the get-go, with a title sequence/exposition montage of casinos being torn apart to a lounge version of Viva Las Vegas. It’s is a hilarious signal fire that lays out the tone and scale of the story like the blueprints for a heist.

The reported budget was around $90m, which honestly is surprising given it has the feel of a much more expensive film. The Justice League filmmaker creates a playground of madness, with effects so grand you could spent the film’s running time just looking at the city’s famous hotels and ruined landmarks. However, there’s a mission to complete. The initial onslaught of undead violence gives way to a long period of set up, with some interesting lore being built. We see the zombies politicised, with abusive authorities using fear of infection as a way to control marginalised communities or bully their way to power. It’s a little bit on the nose, but timely for the world in which we live.

The Ocean’s Eleven style team assembly is also a lot of fun, introducing us to characters such as the meticulous German safecracker Ludwig Dieter (Matthias Schweighöfer) and philosophical mercenary Vanderohe (Omari Hardwick). We know at least some of this crew will be fodder, but everyone brings something, even late addition Tig Notaro as chopper pilot Marianne Peters. The comedian filmed her scenes alone after original casting Chris D’Elia was dropped following allegations of sexual impropriety, but she fits so well into this manic world you’d think she was the original choice.

The team reach Sin City at around the hour mark, and the action ramps up. There are fun sequences, such as Dieter and Vanderohe checking for booby traps by using a crash test zombie, and an excellent placement of Culture Club’s Do You Really Want To Hurt Me? However, much of it is devoted to splatter. Lots and lots of splatter. The cold body count stacks up as the team take computer game levels of bullets. If you want bucketfuls of slimy gore spurting up the walls, you came to the right place.

A double cross subplot is mainly a way of getting the super brainy zombies involved, who themselves only seem to exist to give Bautista and Co something faster to shoot in the final act. The focus is always on the visuals, with both the army and their undead beasts wreaking havoc in the rubble. Moments like the introduction of a Zombie tiger (“she was one of Seigfried and Roy’s”) feel designed for the trailers rather than anything else, but it’s hard to grudge them such a ludicrous visual flourish. It’s cinematic fast food, exciting when it works, but a bit of a slog when it doesn’t.

Netflix released the first fifteen minutes online, which it can afford given the two and a half hour running time. It makes business sense – the streaming giant’s viewing figures are measured by minutes watched, so longer films bump up the numbers (remember, this is the studio that brought us The Irishman). However, it’s far too long for a movie of this type, and as such there are lulls between the action that will have some reaching for the skip button.

At least Snyder casts well. Bautista’s soft-hearted goliath makes a good post-apocalyptic Danny Ocean. Tough, but also funny and vulnerable when the scene requires it, even silly speeches such as Scott’s dream of a food truck sound better with his inherent sincerity. Ella Purnell is charged with providing the melodrama as his estranged daughter, while Ana de la Reguera kicks ass as Scott’s partner in crime.

After a few months of worthy Oscar winners, Army Of The Dead is exactly the kind of brainless action flick that many will love. Turning the volume up on everything you expect from a Zack Snyder film, it would have looked better in a cinema but will become a cult hit for those who can’t get enough survival horror.

Army Of The Dead is available on Netflix from 21st May