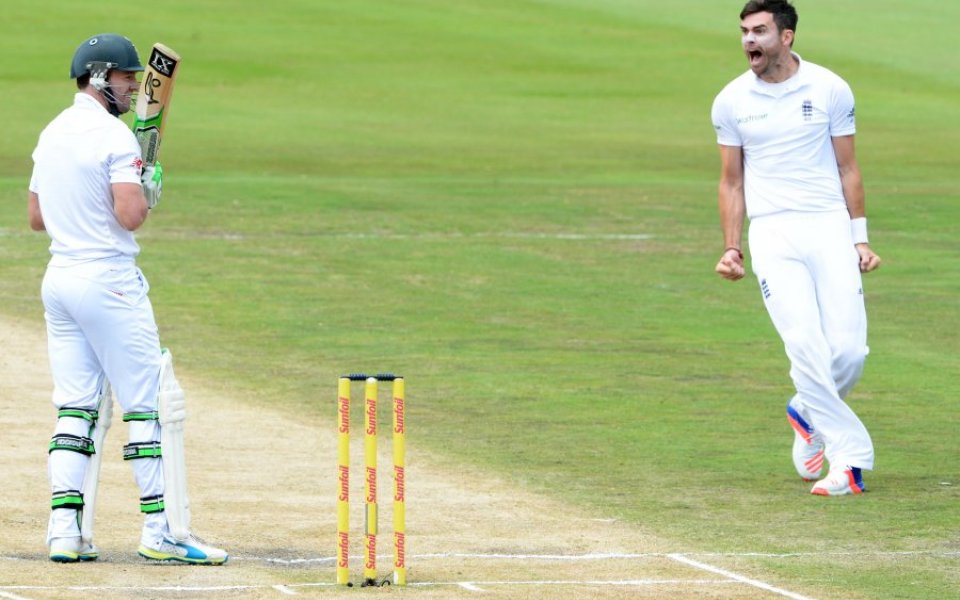 De Villiers was interpreted as aiming a pre-match swipe at Anderson, the seventh highest Test wicket-taker of all time, by implying that the 33-year-old had lost some of his pace.

But Anderson had his revenge when he trapped his rival LBW second ball, while a desperate review failed to save De Villiers, who became the third Test skipper to register three consecutive scores of nought.

“We don’t need any extra motivation but it was mentioned when he got a pair today,” said Anderson, who has claimed 433 Test scalps. “You have to be careful what you say in the media because it can bite you on the backside.”

England are staring down the barrel of an ignominious end to a victorious Test series after slipping to 52-3, having been set an unlikely victory target of 382 as South Africa declared their second innings on 248-5.

South Africa had racked up a healthy lead thanks to an assured 96 from ex-captain Hashim Amla and an unbeaten 76 from Temba Bavuma, despite a quick-fire double-wicket burst from Anderson early in the day raising England’s hopes.

The highest successful run-chase at Centurion remains the controversial 251 which England chased down in 2000, while 98 overs need to be negotiated if England are to avoid defeat.

Such a feat evokes memories of the 10th wicket stand between Paul Collingwood and Graham Onions at the same venue in 2009, which earned England a valiant draw.

“We face an uphill battle but we are going to try and look at it in a positive way,” added Anderson.

“A few of us have been in this situation before, including at this ground, and managed to get out of the game with something so we’ll try and look at it in a positive way.”