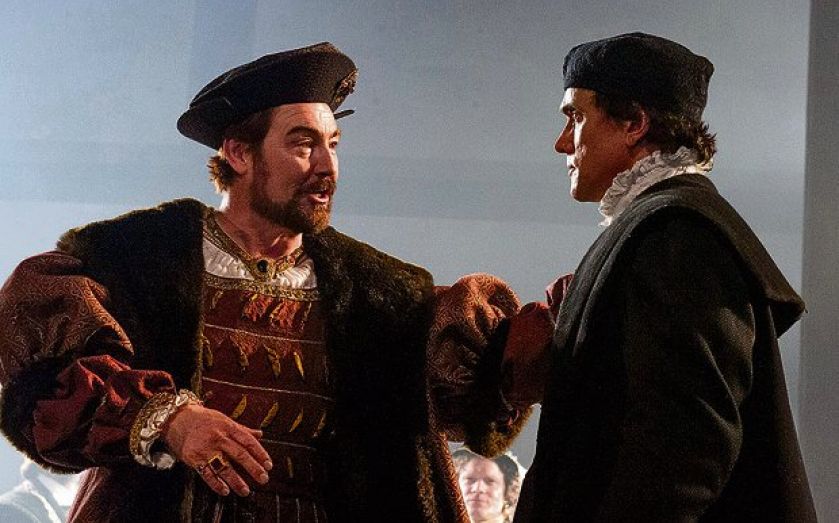 THE UNDERTAKING is epic; two three-hour plays, back to back. But with crackling dialogue, compelling acting, minimalist sets, masterful special effects, extravagant costumes and ersatz crumhorns, the six hours fly by.

Adapted from the first two-thirds of Hilary Mantel’s award-winning, yet to be completed, Thomas Cromwell trilogy of novels, the RSC’s daring “double A-side” production of Wolf Hall and Bring Up the Bodies is a spectacular accomplishment. Set in the court of Henry VIII, and told from the perspective of the enterprising political fixer Thomas Cromwell, it isn’t giving too much away to say that the first play covers the rise of Anne Boleyn, and the second her downfall. But this is not the staid, history-as-soap-opera, David Starkey version of the Tudors that has become so tiresomely familiar; more a dragonless, fully clothed Game of Thrones.

For anyone who hasn’t read the books, studied A-level history, or watched TV in the last 15 years the programme provides background notes, and in any case, the plays do a fine job of placing events in a broader context. The power and economy of Mike Poulton’s script is difficult to fault, but front-loaded exposition may account for the first act of each play seeming a little slow. Fortunately Jeremy Herrin’s unobtrusive, lively direction ensures the plays never become mired in detail.

In a pair of plays with many outstanding components, the most impressive is the cast. As Thomas Cromwell, Ben Miles’ commanding stage presence and sheer endurance are essential to their success. Cromwell is a working class boy made good, and his humble origins are a recurrent sticking point for the noblemen who regard him as inherently inferior. Miles plays him as a learned courtier, who just occasionally shows flashes of the playful, violent man he once was. Nathaniel Parker dons a fat-suit between the two plays as Henry VIII. He portrays the king as obliviously selfish in a performance that stays just the right side of pastiche, while Lydia Leonard is appropriately coquettish and self-satisfied as the overreaching Anne Boleyn. The play challenges assumptions too, with Paul Jesson giving the most sympathetic performance as Cardinal Wolsey, a man usually represented as a Machiavellian caricature. Stealing every scene though, was Nicholas Day’s Duke of Norfolk, who explodes with bombastic energy.

There is far more comedy in the plays than you might expect. Wolf Hall especially is crammed full of not only wry wit, but delightful, arresting visual gags. Though most of the acting is naturalistic, some characters are played for laughs, such as the endearingly awkward Jane Seymour (Leah Brotherhead), and Cromwell’s French servant Christophe (Pierro Niél Mee), who’s like an impulsive early modern Clouseau. The workplace enmity of Cromwell and the ambitious cleric Stephen Gardiner (an enjoyably supercilious Matthew Pidgeon) is almost throwaway, but it is the small touches that make the characters believably human, imbuing the plays with vitality, and making them more than mere history lessons.

BRYAN SINGER’S directorial juggling act with X-Men: Days of Future Past is a wonder to behold. His movie features dozens of mutants plucked from five previous iterations of the franchise (seven if you include the woeful Wolverine spin-offs), all interacting across multiple timelines. Yet it feels nimble, single minded, as slight of foot as one of its super-powered heroes.

Barring a bleak, Terminator 2-esque rumination on whether or not the future is pre-determined, Singer wastes little time with exposition – by this stage there’s a presumption that you have already made at least a rudimentary investment in the X-Men universe. And in at least one possible future of that universe, things haven’t turned out very well. There’s been a holocaust of sorts, with anyone harbouring a mutant gene enslaved and/or exterminated by giant killer robots called Sentinels. As a result, mutants are all but extinct and humanity doesn’t seem to be in a great state either.

Old enemies Magneto and Charles Xavier – played by Ian McKellan and Patrick Stewart, two splendid old thesps who sometimes seem a little too aware of the absurdity of the roles they inhabit – have teamed up for one last effort to change the course of history, sending Wolverine back to the 1970s to stop the assassination that triggers the implementation of the Sentinel programme. Sounds intense, right?

It certainly paves the way for some intense set pieces, including one memorable scene involving the lightning-fast Quicksilver zipping around walls, diverting bullets and knocking off policemen’s hats, all to the tune of John Croce’s Time in a Bottle.

Some of the chintzy 70s period details are a little ham-fisted – consisting largely of shots of flares and lava lamps – but there is fun to be had piecing together the X-universe versions of real-life historical events such as the shooting of JFK and the 1973 Paris peace accord at the White House.

But Singer’s film is more than just surface detail; it’s also brilliantly acted. James McAvoy is on top form as the tortured, drug-using Professor X, who froths and spits and swears with an emotional intensity rare in comic book land. His screen time with Fassbender’s young Magneto is electric, and they’re complemented by great supporting turns from the likes of the brilliant Peter Dinklage as the sinister Trask and Nicholas Hoult as a rather weedy Beast.

Days of Future Past is smart and ambitious, dense and visually arresting; a real super-powered summer blockbuster.

THE PREMISE is a dubious one. Woody Allen’s character, Murray, explains it to us in the opening scene of Fading Gigolo which takes place in a dusty bookshop. He’s short of cash and so is his friend Fioravante (John Turturro), a part-time florist, who’s “not pretty” but is “hot like Mick Jagger”, apparently.

This makes him the perfect man to fulfil the desires of Murray’s doctor who wants to have a ménage à trois with her friend and is willing to pay thousands of dollars for a male participant.

This, as Fioravante correctly assesses, makes him Murray’s “ho” but he agrees anyway and happens to be very good at it. We have no idea how Fioravante feels about becoming a prostitute because he barely says a word. Turturro, who wrote and directed the film, seems to have written a strangely blank, minimalist character for himself.

While this wrong-foots the viewer, it makes for a refreshing story as the focus is shifted away from the man who sells sex and on to the women who buy it.

And what an interesting bunch they are. Sharon Stone’s Dr Parker is using Fioravante to avenge her absent husband, her friend Salima (Sofia Vergara) wants the “real man” that’s absent from her life, and Avigal (Vanessa Paradis), a grieving widow from a Hasidic Jewish community, just wants someone to have dinner with. She says Fioravante “brings magic to the lonely.” That’s certainly one way of putting it.

It’s occasionally amusing, thanks mainly to Woody Allen who essentially plays himself in the most wise-cracking, sleazy Woody Allen part imaginable, but the heart of the film can be found in the way it tackles various manifestations of loneliness with nuance and empathy. Ultimately, Turturro has turned a crass concept into an enjoyable glimpse into the peculiar paths humans tread in the search for intimacy.