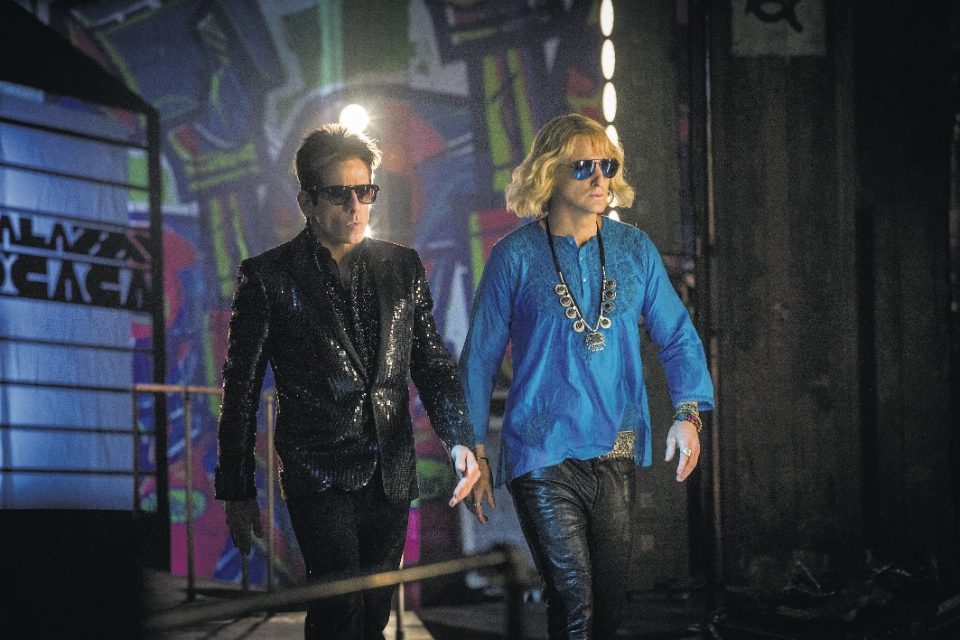 Over the last 15 years, Zoolander has boiled down in the public consciousness to its very essence, becoming less a movie than a handful of fondly remembered quotations. Its pop-cultural caché is so high that it’s easy to overlook its simple premise: the endearing, Chaplin-esque stupidity of its narcissistic leads. This premise is stretched to breaking point – and then abandoned altogether – by an over-ambitious sequel that smothers the deadpan wit that made the original a cult favourite.

Events from the last 15 years are recounted in a choppy news-reel montage: Derek Zoolander’s Centre For Kids Who Can’t Read Good and Wanna Learn to Do Other Stuff Good Too collapsed into the river, killing his wife and disfiguring fellow model Hansel. Unable to cope alone, his son, Derek Jr, was taken into care. Derek withdrew from society, announcing he had decided “to live alone… as a hermit crab.”

Derek and Hansel, reunited by their friend Billy Zane, set out to find Derek Jr and reestablish themselves as really, really, ridiculously good looking fashion icons. They are now, of course, hopelessly uncool, a fact that's underlined by hot new anti-fashion designer Don Atari, a gormless, Americanised Nathan Barley whose every sentence is throttled by layers of irony.

The set-up isn't without it's problems – the fact that Derek and Hansel were taken seriously by the fashion industry in the first place was kind of the joke – but it gives the two leads a little space to bounce off each other, reminding you what a brilliant comic actor Stiller is when he's on top of his game.

But the writing too often takes a back seat, with the film quickly descending into a series of cameos stitched together into something resembling a narrative. The final half hour is like a fairground haunted house filled with celebrities who lurch out for a few seconds before vanishing back into the darkness. Katy Perry! MC Hammer! Oh, god, Valentino? What’s wrong with his face? Too often these appearances fall flat. Kiefer Sutherland is a notable exception: he cracks the movie’s only genuinely out-there gag, a moment that’s jarring in its sudden, dark change of pace, the kind of joke that sits heavy for a few seconds before the ripple of nervous laughter rolls in.

Like Anchorman 2 – another long-delayed sequel – Zoolander 2 makes the fatal mistake of believing its own hype, turning a neat comedy into an all-singing, all-dancing who's who of Hollywood; by the end the screen fizzes with glitter and lava and explosions and CGI. There are too many distractions from what made the original so good: well-written jokes, told by comedy professionals.