Telecoms regulator Ofcom has today named and shamed the broadband, mobile, and landline providers who received the most complaints in the first quarter of 2015. 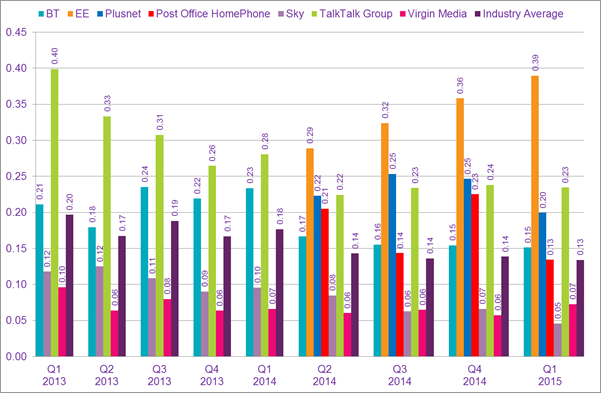 Ofcom, which receives about 300 complaints a day from telecoms consumers, said EE was the biggest culprit when it came to the landline sector: it was the source of 0.39 complaints for every 1,000 customers.

Things did not get much better for EE's broadband customers either.

Again, Sky performed the best, receiving 0.05 complaints for every 1,000 customers.

An EE spokesperson responded to the data, saying:

Our Customer Service Improvement programme is producing positive results but we know there is more work to do. We're very pleased the number of mobile complaints has fallen significantly and we expect to reflect this downward trend in complaints across landline and broadband. Our aim is to offer every customer the best possible service.

In pay TV, BT racked up the most complaints, 0.15 per 1,000 clients. Again, Sky did the best, receiving 0.01 per cent complaints per 1, 000 customers, and being the only provider to get less complaints than the industry average.

Which executive director, Richard Lloyd, hit out at the firms, saying:

We've consistently found that the biggest telecoms providers are letting their customers down with poor service, so we hope that this complaints data acts as a fresh wake up call. People tell us that telecoms are now an essential part of their life, so if providers don't improve Ofcom should step in.