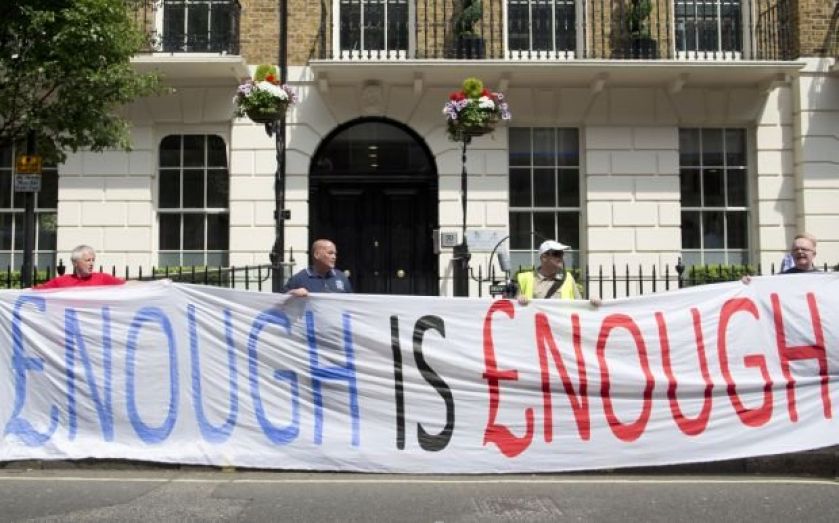 Football fans from all corners of the country have flocked to London to march on the Premier League and Football League headquarters in a demand for “Affordable Football for All”.
The march, organised by the Football Supporters’ Federation (FSF), comes after a number of Premier League clubs – including Arsenal, Liverpool and Manchester City – announced more expensive season tickets for the forthcoming season.
The average football fan in England stumps up more cash to watch their team play than anywhere else in Europe, and has to dig deeper into their pockets than ever before.
A 2011 study conducted by the Guardian found that it was possible to go and watch Manchester United for as little as £3.50 during the 1989/1990 season. The Red Devils now charge more for soup in some areas of the stadium.
Fifteen years later, those prices have risen almost tenfold. The cheapest adult match-day ticket at Old Trafford this season stands at £31. And United aren’t alone. Tickets have rocketed in price across the board.
Of course, those numbers can’t tell the full story. After all, inflation is up 117 per cent since 1990. Yet even when adjusted for inflation, ticket prices for football have dramatically increased. The Anfield faithful squeezed more than any other fanbase as the (inflation adjusted) price of the cheapest adult ticket has risen by 337 per cent.
Yet as the global prestige and popularity of the Premier League has continued to grow, so have the revenues made from television and sponsorship deals. In 2012 the league agreed TV deal that saw its income increase by 71 per cent to a whopping £5.5bn. As the FSF argue on their website, the increase was so monumental when compared to match-day revenue, clubs could have even given tickets away for free and not made a loss:

The increase in Premier League media rights alone could have led to all 20 clubs letting in each and every supporter for all 38 games for free last season without being any worse off than they had been the season before.

What makes the situation all the more galling for English football fans is that they only have to look to the continent to see a successful example of how football can exist as an exciting, elite product while remaining profitable.
The average cheapest season ticket in the Premier League last season stood at £498, over twice as high as the equivalent in La Liga, Serie A and the Bundesliga. There is even a Bayern Munich (the club known as “FC Hollywood”) season ticket available for as little as £104 – cheaper than the most expensive Arsenal match-day ticket.
Speaking at a conference in Dusseldorf this week, Bundesliga chief executive Christian Seifert said it made “common sense” to adopt a more holistic approach that keeps ticket prices low.
He said:

From our perspective, seven of 10 people think that the Bundesliga is important for society. We have a bigger responsibility.